Days before Yeshua’s crucifixion, He taught His people and interacted with them in different settings and with different subjects. One particular discussion that He had with them stands out as significant, for He poses the same basic question at two different times, and the details reveal how masterful was His understanding of a situation and the perceptions of men.

While the Pharisees were gathered together, Jesus asked them, Saying, What think ye of Christ? whose son is he? They say unto him, [The Son] of David. He saith unto them, How then doth David in spirit call him Lord, saying, The LORD said unto my Lord, Sit thou on my right hand, till I make thine enemies thy footstool? If David then call him Lord, how is he his son? And no man was able to answer him a word, neither durst any [man] from that day forth ask him any more [questions].
(KJV)

And Jesus answered and said, while he taught in the temple, How say the scribes that Christ is the Son of David? For David himself said by the Holy Ghost, The LORD said to my Lord, Sit thou on my right hand, till I make thine enemies thy footstool. David therefore himself calleth him Lord; and whence is he [then] his son? And the common people heard him gladly.
(KJV)

And he said unto them, How say they that Christ is David's son? And David himself saith in the book of Psalms, The LORD said unto my Lord, Sit thou on my right hand, Till I make thine enemies thy footstool. David therefore calleth him Lord, how is he then his son?
(KJV)

If you pay careful attention to the details in these three passages, you will notice that Mark and Luke are recording the same event, and that Matthew is actually a separate event from the other two.

The passages from Mark and Luke are in the presence of scribes –those men who were responsible for copying the Law of the Holy One. These scribes were usually of a Levitical family, and thus, were normally of the sect of the Sadducees.

The passage out of Matthew is directed exclusively to the Pharisees, who were a sect comprised of laymen, who had no ties to the Levitical families. These two sects were typically opposed in certain key doctrinal points.

If you notice, however, the Messiah poses a question to both groups – the same basic question, referring to the same verse of Scripture out of the book of Psalms, chapter 110, verse 1, which reads: 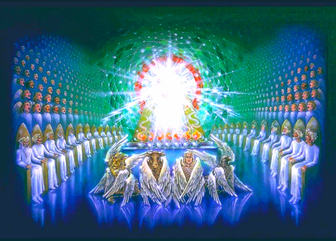 [[A Psalm of David.]] The LORD said unto my Lord, Sit thou at my right hand, until I make thine enemies thy footstool.
(KJV)
The passage Messiah quotes is done so in order to trip up the scribes and the Pharisees and their faulty perceptions of who the Messiah really was.  However, He uses this same passage in two different ways. Look first at the situation with the scribes. The scribes and those of Sadducean persuasion normally read Scripture and understood it in a very "shallow" level. They did not believe in the spirit world, that is, in angels, demons, or an afterlife of any degree. They believed in the Holy One alone as inhabiting the world beyond flesh.

Therefore, Messiah’s question that He posed to them, after they refused to answer Him any further, backs them into a corner theologically from which they cannot get free. Not only has He shut them up already by previous words, He seals their doom in the eyes of anyone else listening by bringing up this verse and a question that He answers Himself, that is obvious to anyone who really thinks about it.

How can the promised Messiah, for whom all Jewish people await, be called, “David’s son,” if David, in the verse from Psalms, instead calls him, “my Lord?” It is understood that a man’s son could never be his “lord” / “master.” That is not how the whole respect game goes. Biblical respect is paid to one’s progenitors, not the progenitor’s paying respect to the descendants. In Hebrew thought and culture, this is just not something that could be--especially to a scribe or Sadducee.

So for David to call his descendant the Messiah, “my Lord” is a HUGE issue in a scribe's thought. This entails that the Messiah must be something more than just a man. He has to have something that David did not, for David to pay such high respect to him. To even begin to consent to such an idea would have been heresy to a scribe or Sadducee. Thus, we see that the Messiah masterfully showed them that not only did He know exactly what He was talking about when they questioned Him, but that through His questioning of them, they had no idea what they were talking about when it came to the subject of the Messiah!  Their perceptions were far off the mark.

That said, consider again finally the second instance of the posing of this same question to the Pharisees in the book of Matthew. In this situation, Yeshua does not ask and answer His own question, but asks it and allows them the opportunity to answer, and only then asks one more question that drops a similar theological bomb on their understanding.

While the Pharisees were gathered together, Jesus asked them, Saying, What think ye of Christ? whose son is he? They say unto him, [The Son] of David. He saith unto them, How then doth David in spirit call him Lord, saying, The LORD said unto my Lord, Sit thou on my right hand, till I make thine enemies thy footstool? If David then call him Lord, how is he his son? And no man was able to answer him a word, neither durst any [man] from that day forth ask him any more [questions].
(KJV)

Some details need to be understood here to clarify why He interacts differently with the Pharisees than He did with the Sadducees. The Pharisees firmly believed in the spirit world, in the existence of the soul, of angels, demons, and an afterlife. They had no hang-ups with such ideas. The Pharisees believed that the Messiah would be the “Redeemer,” filled with the Spirit of the Holy One. It was not a heretical thought to them to think that the final king in David’s line would be paid greater respect if He was endowed with spiritual favor from on High. Therefore, with the posing of this same question, why would they not be able to answer Yeshua, and why would they not want to discuss anything else with Him?  What's going on here?

Honestly, there is no answer to this problem of the Pharisees being baffled when one is reading a translation from the Greek New Testament manuscripts. It cannot be answered from that side of things. However, if one turns to the ancient Aramaic New Testament called the Peshitta text, a surprising subtle difference is preserved in Messiah’s language at this passage alone that explains exactly why they could not answer Him and why they refused to discuss matters with Him anymore. Following is the passage from Matthew as translated from the Aramaic:

Yet, while the Pharisees were gathered, Yeshua asked them, and said, “What do you say concerning the Messiah? Whose son is he?” They said to Him, “The son of David.” He said to them, “How does David, by the Spirit, call him ‘MarYa?’ for he said, ‘MarYa said to my Master, “Sit yourself at My right until your enemies I place under your feet.” ’ If, therefore, David called him ‘MarYa,’ how is he his son?” 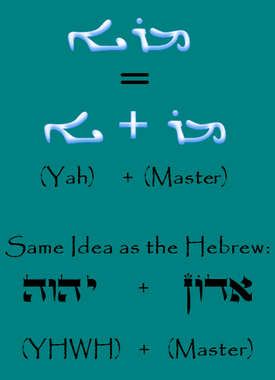 I must point out that the term “MarYa” is a compound Aramaic word literally meaning “Master Yah.” In the Aramaic translation of the ancient Hebrew Scriptures, it was used repeatedly to reference YHWH – the LORD in English translations.  The term is equal to the Biblical Hebrew of ADON YHWH, that is, "Master YHWH," or what typical English versions translate somewhat erroneously as "the Lord GOD" - erroneously in that "God" / ELOHIM is not even present in the Hebrew being translated.  The Aramaic MARYA is therefore a phonetic form of Yah found only in Aramaic names containing the Divine Name YAH or YAHU as the suffix, such as EliYa for the prophet Elijah / EliYah.  In this case, it is added to MAR (Master / Lord) to show the supreme Deity of YHWH.
With that understanding from the Aramaic, do you see what Yeshua has done in this instance? He has asked the same question that He asked the scribes, but He then puts a different spin on it, by inferring that the “MarYa” spoken of in the verse is the “Son of David!” Essentially, He turns the entire presumption upside-down on the heads of the Pharisees, as they answered the question with absolutely no issue with anything He had said, but then with the second question, Messiah throws a massive curve-ball at them.  They weren't expecting this novel way of interpreting Psalm 110. He makes the identity of YHWH being the “Son of David,” not the “my Lord,” as He had allowed with the scribes.

The reason He did this is that the Pharisees understood from various verses that the Messiah would have the same Name as the Holy One – YHWH.  The long-standing tradition of Messiah sharing the spiritual Name YHWH has been preserved in many ancient Jewish texts, although it is not something that is openly discussed in modern Judaism, due to how closely it aligns with mainstream Christian doctrines.  To give an example of the ancient Jewish view of this topic, some of the traditional sources are the following:

They understood that it was technically allowed, but they didn't “get it.” They didn't understand at all the unity of the Messiah and the Father. A man endowed with the Holy Spirit is one thing – that they could handle no problem. But they weren't even considering the possibility of a truly unique man who possessed a special portion of the authority of the Father, to the point of being called ‘MarYa.’ When they realized what He had done, they had no way to speak against Him. It was a radical interpretation that He had proposed, and yet one that they could not, under any manner, even begin to refute!

The sheer brilliance of the Messiah’s execution of this situation cannot be underplayed: He dealt with both of the main opposing religious groups at two separate times, using the exact same verse, and blew their minds in two different ways, yet backed them into the same theological corner with the same conclusion: Messiah is FAR MORE than just a man or a rabbi of our religion - He is a man who carries the authority of the Holy One of Israel!
All study contents Copyright Jeremy Chance Springfield, except for graphics and images, which are Copyright their respective creators.