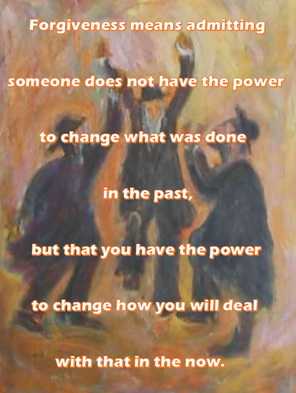 Let’s be honest, you don’t want to forgive a person when you’ve been wronged.  Transparency is best in the topic: forgiveness is not easy, fun, or desirable.  It is difficult to come to that point of letting go, of releasing someone from the right to offense that you have against them.  It is your right to be offended – nobody gets to decide that but you – it is your decision to hold that unforgiveness against a person.  But forgiveness is not something you have in you naturally.  It is simply unnatural to forgive.
​

But since we’re being honest right now, we also must admit another factor is at play in the matter: a believer in the Holy One is someone who deals daily in the unnatural.  We are bound by the One who bought us and brought us into His Kingdom to play by His rules.  We don't get to decide who we shall and shall not forgive.  It is not so simple for a believer to be offended and then go on to maintain unforgiveness towards a person.  In fact, it is part of our unnatural situation that we are actually called by the Messiah Himself to forgive others.  Yet, the forgiveness to which we have been called is not some weak giving in to what has happened to us, but is an action rooted in the strength to do what is difficult, to move in power and in the authority bestowed upon us by a divine dictate.

It might even come as something of a shock, if we’re paying attention to the details of this forgiveness, when we read His words from Luke 6:37 on the matter: 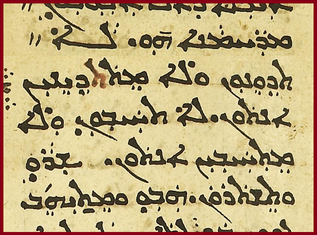 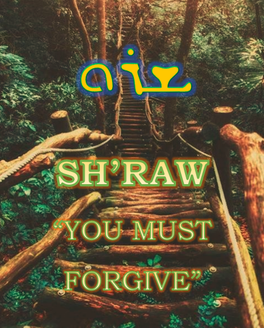 The statement made here is one most people can quote from memory, even if albeit skewed in interpretation.  His declaration is that if we do not judge, we shall not be judged, and if we do not condemn, we shall not be condemned.  The idea lurking behind those two initiating statements is that we can judge, and we can condemn.  It is within our discretion to operate in judgment and condemnation.  He leaves it up to us, because sometimes, there is no option left but to judge and to condemn.
​
Yet, notice the third declaration He makes: “You must forgive, and you shall be forgiven.”  The expression here is translated straight from the Aramaic text of the Peshitta as Messiah spoke it, and it is not a statement, but a command.  The word He uses for “You must forgive” is in a particular tense in the Aramaic tongue: the imperative tense, which is to say, a command / demand being made.  The term SH'RAW means “you must forgive / loosen.”  He is not asking us to do this, nor is He suggesting that we take this course of action.  Rather, our Messiah is making an edict for His people to follow: if you are a part of the Kingdom, you have no choice but to forgive when wronged.  It is the only path that a believer can trod when we have been offended.
This command is elaborated upon later in the ministry of the Messiah.  Yeshua explains further that this unnatural forgiveness we bestow is not just a shallow thing, but is sincere, and takes into account the nature of man to make a mess of things, to try and try again.  In Luke 17:3-4, we read of just how far this demand to forgive reaches for the life of the believer: 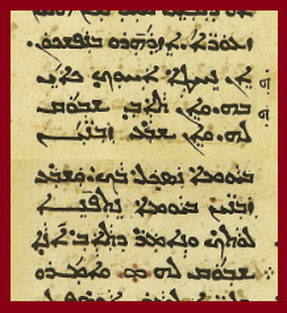 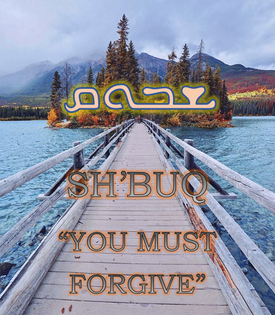 The Messianic edict that we must forgive assumes that, even as believers, we will do unacceptable things to one another, that despite our focus on righteousness and living in the midst of the Holy One, our sin-scarred selves are still yet capable of heinous offense to those we should otherwise show only love.  For this reason, we are commanded to forgive.

Here, again in these verses, the declaration made is in the imperative tense in the Aramaic text.  He is not suggesting forgiveness, but demanding it.  The term He uses here is different than the previous instance, though, and is SH'BUQ, which means “you must forgive / release / spare.”  When we encounter the failures of our brothers, and their subsequent repentance and attempt to do better, we cannot withhold forgiveness, but must spare them the shame of their repeated sins by forgiving them.
The sagacious mind of Messiah understood our broken nature and knew that even in the ever-present work of spiritual repair that we are undergoing as citizens of the Kingdom of heaven, we are prone to perform offense against one another.  Even as bearers of the Holy Spirit, we are not immune to the possibility.  Notice the list that the apostle Paul declared in his letter to the Galatians 5:22-23 were fruits indicative of the presence of the Holy Spirit in our lives: 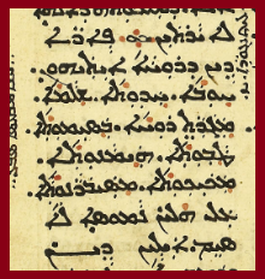 ​22 But the fruits of the Spirit are love, joy, peace, a patient spirit, pleasantness, goodness, faithfulness,

23  meekness, [and] endurance.  Against these has been set no Instruction.
Where is the fruit of forgiveness?  Perhaps surprisingly, it is absent from the list of the fruits the Spirit produces in our lives.  It is nowhere to be found.  We cannot look to the Holy Spirit for the production of such forgiveness.  It does not stem from His indwelling Presence but is something that only our King Messiah can demand of His subjects: the demand to forgive when we have been wronged.
​
This command is of such nature that disobedience to it can be devastating to us.  Messiah even elsewhere states that we must perform this unnatural forgiveness, even if it means we deal with it at the initiating of our prayers to the Holy One.  He tells us this in Mark 11:25. 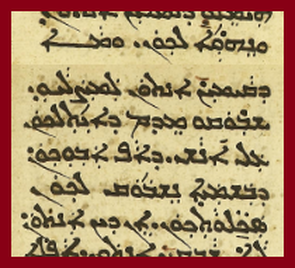 
​And when that you are standing to pray, you must forgive a thing that you have against a man, that also your Father who is in the heavens shall forgive you your offenses.
If there is anything at all that we have against another, we must deal with it, and if we are in the act of prayer, it must be at the forefront of our mind to get right, or else our prayers will be hindered.  He tells us this for our own safety.  In fact, this demand that we forgive even at the moment of prayer is so that we can speak a bold declaration to the Holy One, Himself.  Note carefully the way the text is worded as translated from the Aramaic of the Peshitta in the famous “Lord’s Prayer” that He gave for us to use in our own praying, recorded first in Matthew 6:12.

​And You must forgive us our debts, as also we have forgiven our debtors.
The counterpart in Luke 11:4 is similarly expressed: 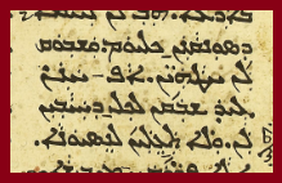 ​And You must forgive us our sins, for even we have forgiven all our debtors.
Notice the unique tense of the Aramaic in our prayer to the Holy One?  We should probably be astonished but also fearful in this revelation of how we can pray to Him: we have the right to make a demand of the Most High in prayer to forgive us of our sins so long as we have previously forgiven those who have sinned against us!  Scandalous it might sound at first consideration, but the reality is true: if we have extended ourselves into an unnatural forgiveness, we are situated to be unnaturally forgiven, as well.  It is all stipulated on the reality that we have already performed that initial forgiveness, as the tense of the Aramaic is clearly shown in the above English rendering.  Again, if we have already obeyed Messiah’s command that we forgive those who have wronged us, then we do not come to Him asking for forgiveness, or suggesting He forgive us – no, we come with the authority given us by Messiah and demand of the Holy One that He uphold His side of things, and release to us the forgiveness we need.

The Messiah has not given us this radical demand without showing us it being lived.  It is clearly displayed in His own life at the most unnatural of moments.  While He hung from the cross in pain and agony of all the betrayal that had transpired over the previous day, He was able to make this astounding statement, recorded in Luke 23:34 for us to hopefully truly absorb: 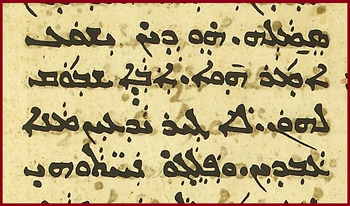 ​Yet, Yeshua, He said, “Father, You must forgive them, for they are not recognizing what they are doing!”
Enwrapped in more torture than we can imagine, His mind and heart united into a moment of prayer that could be viewed as itself offensive to human minds, yet showcases the depth of His compassion for all Israel.  Yeshua did not ask for the Father to forgive, He did not suggest it as an option.  Instead, He spoke in the fullness of His authority as the Son and as one who had already released in His own heart all responsible for His execution, and in that state, He demanded of His Father to release them, as well.  In a stunning display of compassion and the desire to be united with His people at that most dark of moments, He portrayed the true power of forgiveness, and the fact that the one who forgives is not weak, but stronger than we can understand.
​
Perhaps this is why the psalmist wrote in Psalm 130:4 the curious statement that I leave now with you:

​for with You is forgiveness, for the purpose that You shall be feared. 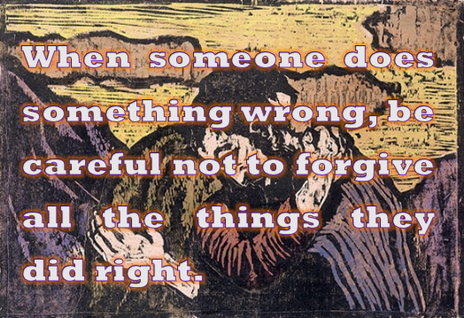 Forgiveness is unnatural.  Everyone will have done something at some point or another to be offended or to be an offense, and none of us want to bestow it in our own selves.  Hurts done against each other are real and not easily dealt with.  Despite the hurt and difficulty addressing them, though, they must be faced, and faced in such a way that brings honor to the One who possesses true forgiveness, and is a fitting display of what it means to be part of His Kingdom.  So, no matter how unnatural it is, we serve the One who took that unnatural action of forgiveness and made it a command for us, and so we can ask ourselves again now the same question which began this study:
​
Who needs forgiveness?
​​All study contents Copyright Jeremy Chance Springfield, except for graphics and images, which are Copyright their respective creators.