The single greatest commandment in all Scripture is found in the book of Deuteronomy 6:4-5, which says:

Why are we commanded this?  Think about it: the most intimate, the most pure and personal emotion and state a person can ever exhibit - love - is commanded of us to be shown to the Most High.  Let that sink in for a moment.  This is the heart of Scripture – the heart of the Law!  It is the utmost binding legal requirement upon all men!  You are legally commanded to love the Creator!  The Law of heaven, the Words written by the Spirit Himself, has bound you to give your most intimate devotion to the Master of heaven and earth.

You are expected to obey.  The Law says “Love.”

But how can you love by a legal ruling?  How can your heart, soul, and very essence be invoked and called upon to give love?

Love; that four-letter word that wells up seemingly uncontrollably from the depths of our beings, erupting in power that can set the world on end – that can be commanded of us?

How could this be?

How can something such as this be demanded of men?  How can such a grand thing be reduced to legalism?

In the book of Romans 5:8, the apostle Paul is so bold to let the Spirit do just such a thing in his own words.  He says:

“Herein Alaha shows His love unto us; that while we were sinners, the M'sheekha died for us.”

Before any kind thought or act of allegiance took place on our part, He had already invested Himself irrevocably for the obtaining of a people for redemption.  Without first being asked, He gave.  Before our call, He was already responding.  And it did not cost Him jewels or gold or any earthly riches.  It cost Him His very own Son; the Heir to all laid all down, that He might pick up from the dust the shattered Image of His Father, breathe new life into that form then restored, and call us ‘brothers.’

Now I ask again, how can He demand love of us?  How can love be a legally-binding requirement upon His people? 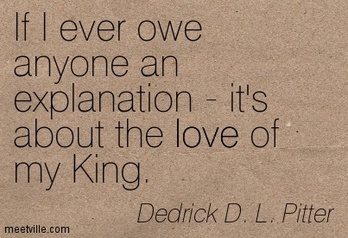 The answer should now be obvious: we owe Him.  We owe every atom in love to Him.

One of Messiah’s students understood the reality of the situation very plainly, and in simple words, stated it for us to read today:

Love is thus a response.  We respond to His affections with all that we are.

It makes sense when we put it all together, doesn’t it?  How nice to have it laid forth and “get it” with the various verses set before us like this.
But have you ever wondered how these men knew?  What prompted them to consider such possibilities and finally declare them as facts?  Surely they were not just saying things that sounded good on paper.  No, they were proclaiming the very realities shown to them by the words of the Messiah Himself.

Messiah openly discussed that the most important duty of mankind is to perform the legal requirement of loving the Creator.  He is recorded declaring this truth in Matthew 22:37 and Mark 12:29-30.  There is no questioning where Messiah stands on the matter: man must love the Creator.  Nothing less will do.

But there is another passage from Messiah’s own words that also shows that His students were listening and learning that love is a debt we owe the Most High.

In the book of Luke, the 7th chapter records an account where the Messiah is at the home of Simon, a Pharisee, having dinner.  During this time, a sinful woman came with an alabaster container and began anointing the Messiah with her tears and washing His feet with her hair.  The entire account can be found from verses 36-50.

Once the woman begins anointing Him and washing His feet with her hair, the Pharisee cannot understand why the Messiah is allowing such a thing by a woman of her history, and decides that the Messiah cannot be a prophet, after all.

In response to this inner thought of Simon, the Messiah set up a scenario and posed a question to the Pharisee about two debtors who owed their creditor differing amounts – the first debtor a large sum and the second debtor a small sum.  Neither, however, could repay the creditor, and he graciously forgave them both debts.

The question Messiah then asks is straightforward: which debtor will love the creditor more?  Simon correctly says it would be the one who was forgiven more debt.  The Messiah then proceeds to declare that the woman who has been anointing Him and washing His feet loves much, because she has been forgiven her great debt.

Hopefully you can see what His students were seeing by witnessing or being told again of this amazing account.

But let me drive the point home to you in a further way which they received it and for which reason it stuck so strongly in their minds so as to later proclaim the words they did about love.

In Aramaic, the everyday language of the Messiah, one of the most prominent words for “love” is KHUBA.  In the ancient Aramaic text of the New Testament known as the Peshitta, this term is used extensively for “love.”

Additionally, the Aramaic term for “debt / owe” and also “creditor” is KHABA.  It is spelled exactly the same in Aramaic as KHUBA “love.”  The terms are pronounced differently, but they are spelled identically. Grammatical inflection and context determines how they should be understood.
In the Aramaic Scriptures, these three words are the ones used in the account from Luke 7, verses 41, 42, and 47.  When Messiah spoke of debtors, owing, and creditors, and then about love, He was using these very terms in a stunning and undeniable way that drove His point straight into the heart of the Pharisee.  Thus, those originally listening to this account, and those who were retold it later, and those who read it after it was committed to writing, were all able to hear and/or see the powerful word-play invoked by the Messiah.  When He got to the end of His speech to the Pharisee, Simon knew without a doubt exactly what He was trying to say because it was contained powerfully in one simple repeated word meant to be understood in both salient ways.

Even Paul recognized this intrinsic link between “love” and “debt,” for he made a similar word-play as the Messiah did on the terms in Romans 13:8, where he wrote:

And to a man nothing should you owe, except love one to another, for he who is loving to his companion fills up the Instruction.

Love is a debt.  Each man owes to repay what he has been so graciously given.

The Law demands love of us, because it was the Lawgiver’s to give it in the first place.