Of all the words the Messiah had with people recorded in the Gospels, the ones that stand out as wincing polemics against religion are found in the scattered meetings with the Pharisees.  These individuals were a group of several thousand laymen who began to strenuously learn and observe the commandments of the Most High to the best of their ability.  This endeavor brought with it the side effect of creating multitudes of man-made precepts that became considered just as important, and in many cases, more important, than the commandments of the Most High.  These Pharisees are the progenitors of modern-day Rabbinic Judaism.

While Messiah was not absolutely against these men and their attempts to guard themselves from error, He took particular issue with their elevation of performing traditions above the commandments given in the Torah.  Traditions are not in and of themselves to be rejected; rather, it is the promotion of a tradition as more binding than the Words of the Holy One that is to be staunchly opposed.  The Pharisees had extensive traditions that were practiced over and above the clear and simple commandments of the Torah.  Today, one can read example after example of such traditions in the voluminous tractates of the Jewish work known as the Talmud, for starters.  In its extensive folios can be found instance after instance of discussion of tradition and its performance.  While Scriptural matters are admittedly the basis for such expositions, they actually form a very minuscule part of which the tradition becomes the much-elaborated-upon focus.  There is good and bad in all of this, and anyone who has ever delved into the topic will understand how delicate of a balancing-act it becomes to sincerely attempt to perform the Torah’s commandments and the traditions in the Talmud.  The position of Messiah as opposing such a lifestyle is quickly seen to be full of wisdom.  It is impossible to serve two masters.

Gospel passages record these instances where Messiah takes firm stance against the skewed glorification of religious tradition practiced and promoted by the Pharisees.  The following examples I have translated directly from the Peshitta Aramaic text of the ancient Khabouris Codex: 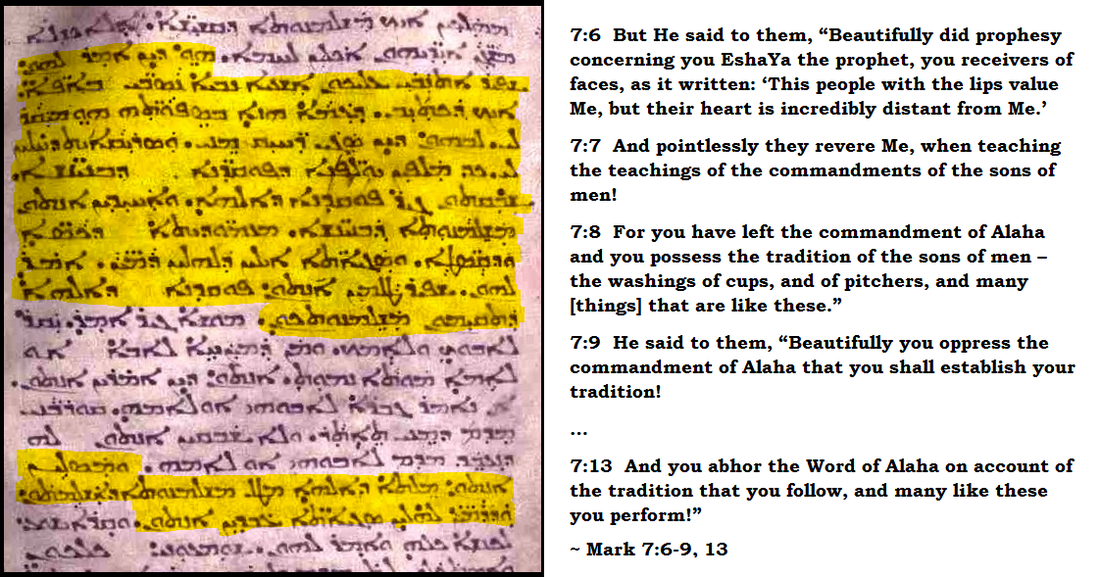 The insistence of the Messiah is that the performance of the statutes of the Word is the most important thing for the believer, and anything that causes such performance to falter is to be rejected.  Only tradition that takes a backseat to the Torah is tradition in its proper place.

The Torah teaches us to love the Holy One.

The Torah teaches us to love each other.

The Torah teaches us many other ways to live as holy people in a sin-scarred world. 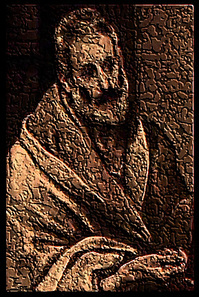 These perspectives of Messiah on the matter are entirely significant, and should be even further considered in light of the writings of one of His most notable of students: Paul.  Paul was originally of the sect of the Pharisees.  Although born outside of Israel, he was raised from a child in the city of Jerusalem at the feet of Gamaliel of the school of Hillel, whom Judaism considers one of the greatest teachers of Torah (see Acts 22:3).  Of Paul it could essentially be said he was born into the sect of the Pharisees, as even his own father was one before him (see Acts 23:6).  He was thus thoroughly immersed in the traditions and their improper elevation which Messiah so readily confronted.


Paul’s writings address many different topics, and yet, a detail that repeatedly resurfaces in his letters is that of rejecting the improper adherence to the traditions espoused by the Pharisees, and particularly, the sect that went by the title GEZURTA – that is, The Circumcision.  It was not all Jewish people and their observances that Paul stood against, and it was not even against all in the Pharisaic movement, but rather, against those who extolled tradition above performance of the commandments of Torah.
It should be a matter of careful consideration, then, when Paul suddenly speaks in favor of believers in Messiah keeping these traditions.  In three separate passages, the Greek text of his writings clearly has him promulgating the performance of tradition to his readers:

Now I praise you, brethren, that you remember me in all things and keep the traditions just as I delivered them to you.
~ 1st Corinthians 11:2 (NKJV)

Therefore, brethren, stand fast and hold the traditions which you were taught, whether by word or our epistle.
~ 2nd Thessalonians 2:15 (NKJV)

But we command you, brethren, in the name of our Lord Jesus Christ, that you withdraw from every brother who walks disorderly and not according to the tradition which he received from us.
~ 2nd Thessalonians 3:6 (NKJV)

How can Paul rightfully denounce the adherence to inappropriate tradition in so many places, and then turn around and sneak in a call to keep those very traditions?  Is Paul speaking out of both sides of his mouth?  How are we to understand this?

There is no viable answer in the Greek text of Scripture.  As wonderful as the text has been to be spread across so much of the globe, there are unfortunately places where it shows itself as faulty.  In these scattered instances, a return to the original ancient Aramaic text of the Peshitta will bring a resolution to the problematic detail of the Greek text.  In these instances, the answer is found in the Aramaic text, and fits seamlessly with the rest of the tone of Messiah towards those who would pervert the performance of the commandments by setting them below their adherence to tradition in importance. 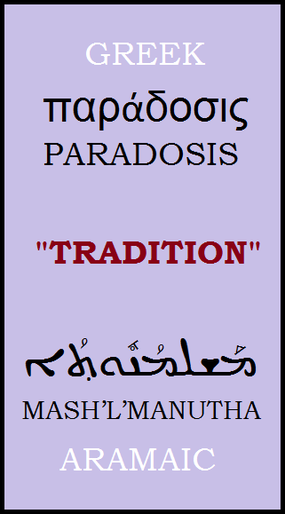 In the above passages from Paul’s writings, the Greek text contains the same term as is found in the Greek texts of the passages quoted prior in this study where Messiah speaks negatively about the keeping of traditions.  It is the Greek term PARADOSIS, and literally has the idea of what is “given.”  The Greek, therefore, has Messiah speaking out against tradition, while Paul speaks about observing tradition.  The Greek has a clear problem on its hands.

The Aramaic text of the Peshitta makes a blatant distinction between what Messiah calls “tradition” and what Paul is speaking about, and understanding this changes drastically how Paul’s words should be understood.  Messiah refers to “tradition” by using the term MASH’L’MANUTHA, meaning “the giving / handed down” literally “reception,” of a thing.  This is the Hebraic concept of “tradition.”  This concept is aptly preserved in translation by the Greek choice of PARADOSIS, meaning what is “given.”  Messiah consistently uses that specific Aramaic term when speaking about the “traditions” of the Pharisees that He opposes. 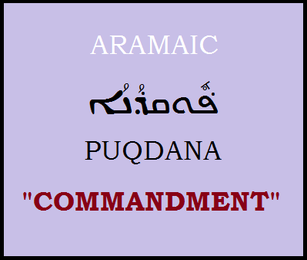 The Aramaic term used by Paul in the above three passages from his writings is surprisingly not the same term that Messiah used!  The term that was used by Paul actually is not even rightly defined as “tradition” at all!  Rather, the term Paul used is the Aramaic PUQDANA, meaning literally “commandment.”  It is used extensively in the Aramaic text of the New Covenant to refer explicitly to the commandments of the Torah.  In fact, it is an Aramaic cognate of the Hebrew PIQQUDIM, a term that appears twenty-four times in the TaNaK, and only in explicit reference to the Torah’s commands!
What does this detail from the Aramaic tell us?  It very clearly shows that the writings of Paul were affected by the translation process.  This caused the reader to misapply his original intent, and obscured his actual promotion of the performance of the commandments of the Torah by the recipients of his letters.  He intended them to carefully obey the same commandments he is seen obeying over and over again in the book of Acts.  With the proper understanding of what word is actually in the text, let us revisit those three passages of Paul’s as they should be read from the Aramaic, translated directly from the Aramaic Peshitta Khabouris Codex: 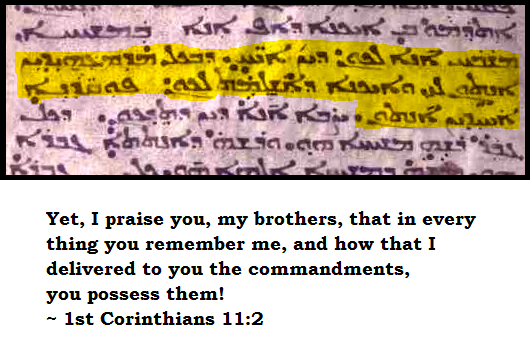 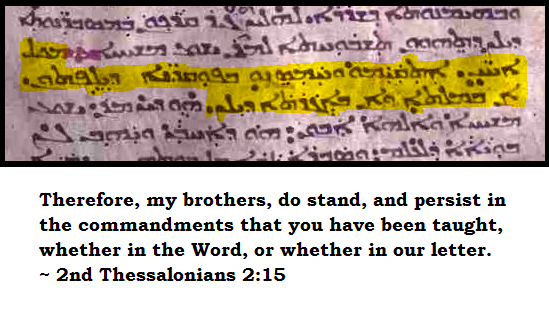 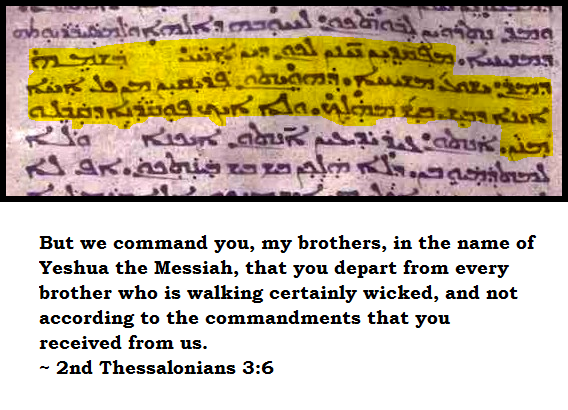 The witness of Scripture concerning tradition is therefore in agreement.  There is no contrast between what Messiah says and what Paul says.  Messiah deplored the Pharisaic method of setting aside the commandments of Torah in favor of their own traditions.  He desired men to instead simply follow the inspired commandments of the Holy One.  Paul’s writings, when properly understood through the Aramaic text of the Peshitta, also blatantly display his promotion of the performance of the commandments to those reading his letters.

Tradition in some form or fashion will inevitably develop among believers everywhere.  However, tradition must never usurp the Spirit-led observance of the commandments of the Most High.