Each soul is on a trek full of myriads of situations and obstacles that populate our days with the entire spectrum of the human experience. This trip of a lifetime has its moments of breathtaking beauty as well as troubled times that take our breath away in grief.
​
To each of us, we are given the opportunity to travel this same rambling foray with faith in the Creator of all things or in the feckless whims of our own trembling hearts. We can choose a path leading to the high destiny planned for man, or the route that takes us through harsh judgment that man was never created to know. 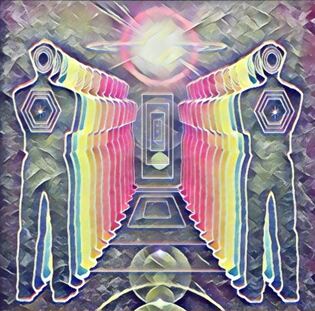 The choice is ours.
​
Yeshua spoke to this reality facing each man in the book of Matthew 7:13-14.

13 You must enter into the narrow gate, for wide is the gate, and large the way which is leading to loss, and many are they who are going on it.
14 How small the gate, and narrow the way that is leading to life, and few are they who are finding it.
This is man’s grand dilemma: a way to life or a way to death. The gate to life is narrow and its path is difficult, but the way to total loss seems easy and broad. 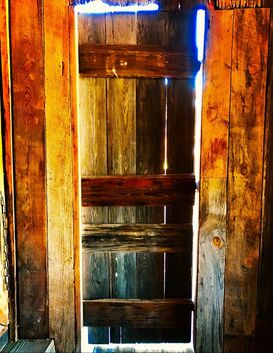 Yeshua’s words, when appreciated from their Aramaic as I have translated above for us from the text of the ancient Peshitta New Testament, help us to understand the nature of the path we will take if we let the Spirit rule in our decisions.

​He tells us that the gate and the path leading to life are “narrow.” 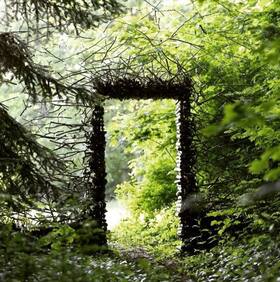 This concept has long been presented as a very defined path of belief and behavior. While there is truth in such an understanding of the term, the Aramaic text uses a word that reveals this concept presents a more meaningful assertion that aligns with the Word’s testimony in another way.
​
The term Yeshua uses for “narrow” in both verses is ALITZA, and also means “afflicted.” 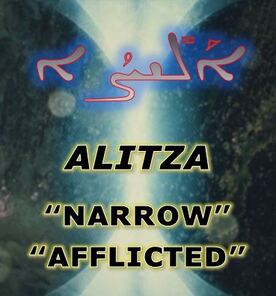 The way to life is not easy: “narrow” is the traditionally preferred rendering, but the additional Aramaic notion of “afflicted” speaks even more soberly to the difficulty of the journey awaiting all seeking a future framed in purpose and meaning. To travel on the proper path will require determination and focus. It is a path where courage and resilience must accompany each heart that dares to venture down the corridor whose reward for such faith is life everlasting. 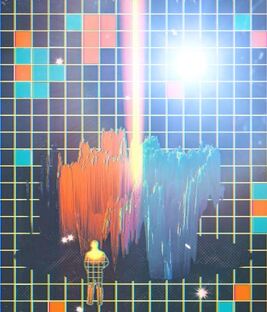 Interestingly, Yeshua’s words seem to simultaneously link and contrast the issue at hand when appreciated further in their Aramaic context. The term translated above as “large” is the word ARWIKHA, and is followed immediately by the noun UWRKHA "way," with the two having nearly the same spelling (just one letter different and one letter transposed).

​This created a subtle word-play by Yeshua, emphasizing that “the way to go” seems inherently large, yet the way is truly narrow—and by definition, afflicted!

This narrow path is the “way to life,” or as Yeshua coined it in verse 14 above: UWRKHA … L’KHAYE—“the way [leading] to life.” 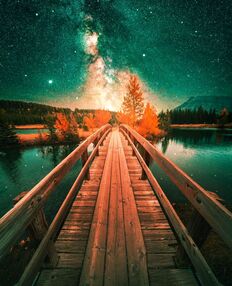 This is the same path mentioned in the Hebrew Scriptures in Proverbs 10:17.

The way to life is he who guards discipline, and he who rejects correction strays.
The Hebrew text here reads the phrase “The way to life” with the words ORAKH LEKHAYYIM. It is rendered in the Peshitta’s version of Proverbs with the cognate phrase UWRKHA D’KHAYE, which is essentially the same phrase as Yeshua used in His own teaching.

This way is said to be found in him who guards “discipline.” The term here is the Hebrew MUSAR, which entails a “chastening,” or a “”rebuke” or “reproof” type of teaching that, while unpleasant, is intended for the ultimate edification of the individual so that they are on the proper spiritual path by being controlled in situations through the Spirit and not the flesh. 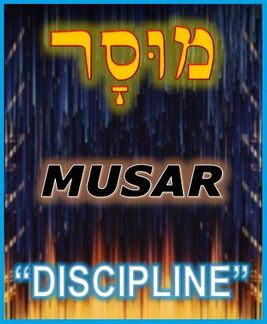 This is the type of teaching that Yeshua presented to the crowds in the majority of His interactions. He chose His words carefully and with wisdom, linking these thoughts to the Hebrew Scriptures very obviously. Yeshua's words, with their foundation in the spiritual life expected of the people that is recorded in the five books of Moses, built upon them and conveyed a threat of separation from the Holy One and ultimately a profound spiritual loss if a person’s sins were not addressed. For he who intentionally remains bound by carnal impulses, rejecting the Spirit’s mastery over all aspects spiritual and mundane, that person will only know destruction of the soul. Through the rhetoric of MUSAR “discipline,” Yeshua’s statements were bold and striking, pointing the way to the right path in life—the narrow and “afflicted” way! 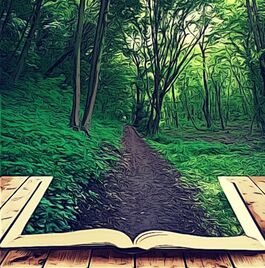 This use of MUSAR “discipline” as one of chastisement and reproof aligns perfectly with Yeshua’s assertion in the Aramaic that the path to life is “afflicted.” A life of discipline is a holy life—restrained in all the ways that are revealed in the Torah, and in this set-apart manner of living according to His will we are able to stay focused on the journey to everlasting life. The believer must be dedicated to following the route that has been laid for him by the leading of the Spirit. 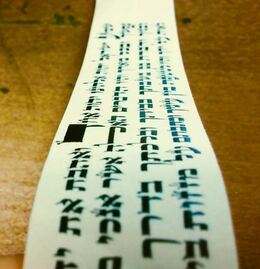 As strange as it might seem, this type of path was not so clearly defined for people until Yeshua’s grand act of personal discipline occurred, of self-imposed MUSAR revealed in His own willingness to be lead by the Spirit to a death where He remained firmly in control of all His carnal desires for self-preservation.
​
A comment in the book of Ecclesiastes 11:5 tells us this profoundly spiritual path was not originally made known to us. 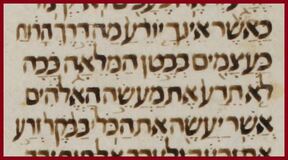 ​Just as how you do not know what is [the] way of the Spirit, [or] how bones [form] in [the] womb of her full [with a child], thus do you not know the work of the Deity, who makes all of it.
The Hebrew here reads DEREKH HARUAKH “[the] way of the Spirit.” Some translations render the term HARUAKH as “the wind,” giving this passage a different context than I have translated it. The reality is Solomon used a Hebraic poetic device called a Janus Parallelism, (see my studies: PRESERVED WITH PIVOTS and MORE THAN SPARROWS for examples in Scripture) where a word with multiple meanings is used between two different thoughts to as a hinge upon which one thought transitions to the next, one meaning fitting the prior context and the second meaning what comes after. Ecclesiastes 11:4 refers to “wind” (with the term RUAKH) and “clouds,” so it is natural to assume the use here of HARUAKH was intended as “the wind,” but as the passage unfolds, there is a change of thought to “bones” in a developing embryo within a womb, which forces the reinterpretation of HARUAKH into the context of “the Spirit” and the Divine work thereof in animating a human soul into this life. 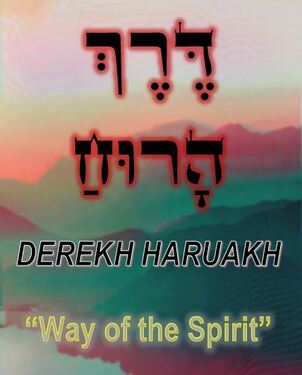 The Spirit’s path is not always clear, because the path to destruction is wide and large, embracing the spectrum of the carnal yearnings of being a human, and as such is deceptively the more preferred road to travel. Taking the easy path will end in flames and loss. 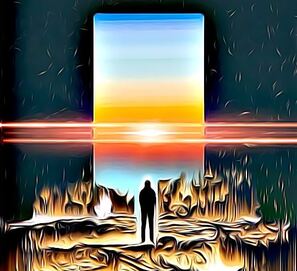 But it is through allegiance to the example made for us by Yeshua that we can move forward on the way we have been called to follow, focusing on the spiritual aspects of a life of dedicated holiness that helps us understand the true way is the narrow and afflicted path.
​
It is in Hebrews 9:8 that this truth originally uttered above by Solomon in Ecclesiastes 11:5 is explained more fully. 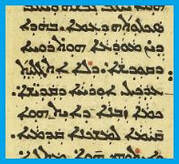 ​Yet, by this the Spirit of Holiness made known that the way of the holies was not yet revealed, for what time was standing the first Tabernacle.
The system of sacrifices delineated in the Torah provides profound mercy for the believer and is not to be denigrated. However, the merit of Yeshua showed us that with the Holy Spirit comes the strength to go further than the sacrifices can take us. While the Tabernacle’s system involved the death of a substitute, Yeshua showed us that dedication to the holy path involves the death of self—the afflicted way that leads to life. Like Yeshua, we must be willing to go as far as it takes to be right with the One who has called us to Him. 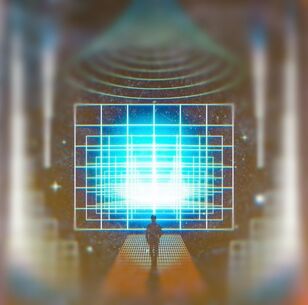 While we follow in those footsteps on the way of holiness, we know that it can only occur through the presence of the Spirit, as the above verse explains. The Aramaic text even speaks to this factor in a beautiful way. The phrase “Spirit of Holiness” is RUKHA D’QUDSHA, while the phrase “the way of the holies” is UWRKHA D’QADISHE—an almost identical phrase in spelling and pronunciation.

It does not take much imagination to perceive the link between RUKHA "Spirit" and UWRKHA "way." This phonetic link hints to us that the way to Him is a spiritual one, defined by Him alone.

Through this unique word-play preserved in the ancient Aramaic text of Hebrews, we can see that the presence of the Holy Spirit is vital for those on the way of holiness. If we are to successfully live dedicated lives, focused on the spiritual instead of the carnal, we must do so only by being empowered by the Spirit. This journey of faith will be made by the mysterious method of the Most High, who has decreed that the way must be narrow and the path must be afflicted. 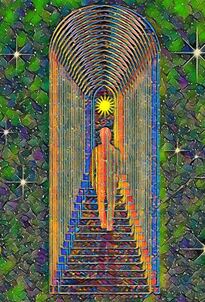 The narrow way was trodden first by Yeshua.

​His own trek to everlasting life took Him through affliction beyond what we have experienced and whose unmatched merit forged a way into the presence of the Holy One for all who would come by that route. His footprints are ever fresh for the believer on that same narrow way, who is disciplined and determined to follow the path of the Spirit.
​All study contents Copyright Jeremy Chance Springfield, except for graphics and images, which are Copyright their respective creators.