​
Several of Yeshua’s teachings emphasize the importance of a believer truly trusting the Holy One. Faith in the Most High doesn’t mean belief in Him but knowing that He can be trusted more than the situations of life. It does not take much contemplation for one to see how trustworthy He is to His people. He can be relied upon to do good for us, even when we are not cognizant of that good, and even when we need discipline for our sins, we can still trust Him knowing that such correction is for our benefit.
​
One such teaching about trust in the Holy One stands out regarding its beautiful Semitic parallelism, and yet, it also holds a clever detail that is somewhat of a subversion of itself, as it points back to the entire context of the teaching. This brief focus on trusting the Most High is found in its complete form in the book of Luke 11:11-13, and in part in Matthew 7:9-11. To emphasize the trustworthiness of the Holy One, Yeshua shares in this parallelism examples of the trustworthiness of a human father to his son.
11 If a son shall ask bread of any of you that is a father, will he give him a stone? or if he ask a fish, will he for a fish give him a serpent?
12 Or if he shall ask an egg, will he offer him a scorpion?
13 If ye then, being evil, know how to give good gifts unto your children: how much more shall your heavenly Father give the Holy Spirit to them that ask him?
These simple questions are built around a framework of Semitic parallelism, which is used throughout Hebrew Scripture as a poetic device that allows for a particular concept to be relayed in a way that aides in memorization of what is being said. The way it works is to present an idea about a specific notion, and then to repeat that idea with a similar thought that parallels the initial one. It is basically a repetition which creates an environment of memorization for the reader / listener to truly absorb and appreciate what is being taught. The book of Proverbs is an especially good source for encountering and appreciating the use of Semitic parallelism in the Hebrew Bible.
​
In the above passage as quoted from the traditional KJV text, the parallelism is as follows:

It is seemingly straightforward in parallel presentation.
​
Except – it isn’t. 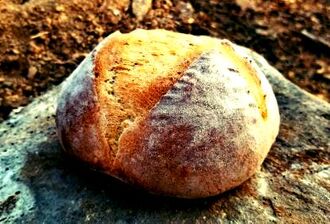 ​Bread and stone align well as in regard to their visual appearance, having a rough texture, and the fact that bread was typically baked on a stone in ancient times.

​One is food and one is not. 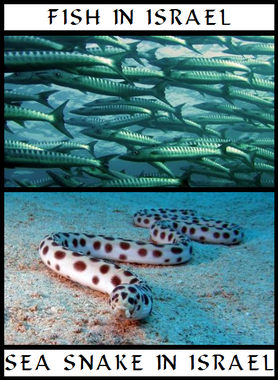 
​Fish and serpent align well regarding how both are living creatures which are also found in water and also have somewhat similar of an appearance.

​One is food and one is not. 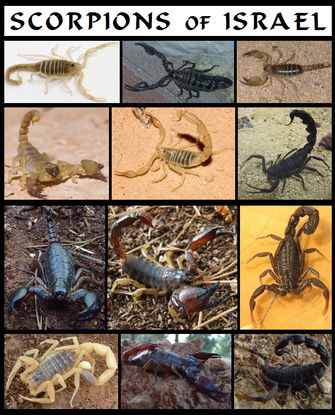 ​
​Egg and scorpion do not seem to align very well at all, however. An egg has no similarity to a scorpion. The shape and color of an egg and the shape and color of a scorpion share no basic similarity. While fowl lay eggs, scorpions do not, but give birth to live young, instead. Nobody could ever see a scorpion “egg.” This “problematic parallelism” is one that even Bible scholars and commentators have highlighted as an issue over the centuries. To really display the problem that faces this parallelism, over twenty species of scorpions have been found in Israel, and the following chart displays several of the different types encountered there – none of which would be easily mistaken for an egg.
In this we see a surprising breakdown in the Semitic parallelism of Yeshua’s statements. 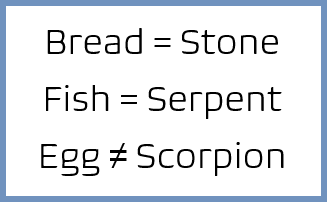 Why would this happen?

It is my opinion that the breakdown is actually representative of something else, entirely. It appears that a disconnect arose in the translation event from Aramaic into Greek. As the KJV is an English translation of Greek texts, it would preserve any errors that might arise from such translation failures.
​
Returning instead to the Aramaic allows for an insight into the situation that, I believe, aides in understanding the Semitic parallelism created here, and speaks further to what Yeshua was actually attempting to convey to His listeners. The Aramaic of the Eastern Peshitta text of Luke 11:11-13 can be translated in the following manner. 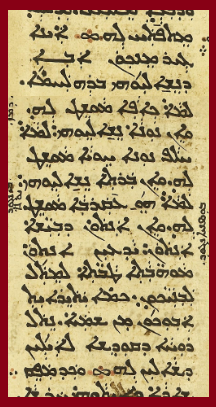 ​11  For what father from among you, whose son should request of him for bread, why, would he extend for him a stone? And if a fish he requests of him, why, instead of a fish, would a serpent he extend for him?

12  And if a berry he requests of him, why would he extend for him a scorpion?
​
13  And if you – who are evil – you know to give good gifts to your sons, how much more your Father from the heavens shall give the Rukha d’Qudsha to them who request to Him?”
We see that the parallelism aligns seamlessly from the Aramaic to the Greek regarding the bread – stone and fish – serpent ideas. It is in verse 12 that the Aramaic shows a markedly different presentation.
​
Instead of “egg,” I have rendered the Aramaic term BARTHA as “berry.” The reason for this alteration in translation has to do with the polysemous nature of the Aramaic term BARTHA. It can mean “egg” or “berry,” depending on the context. In fact, the term itself literally intends a “small spheroid object,” and does not inherently hold the meaning of “egg” or “berry.” 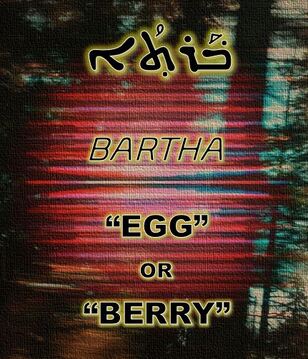 So, why would “berry” be a rendering preferred over “egg?”
​
Firstly, the Aramaic language has a term that is widely used and recognized immediately as “egg,” which is the word BEYA. 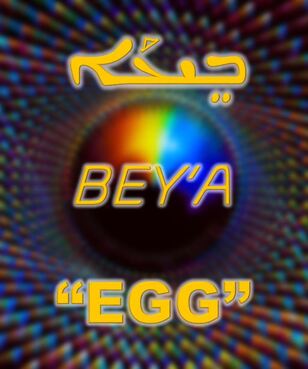 This word is so widely used, in fact, that it is a cognate of the Hebrew term BEITZAH, wherein the Aramaic merely interchanges the letter Ayin for the Hebrew term’s letter Tzadi, a common feature in cognates between the two tongues. For this reason, since the Aramaic term BARTHA here in the Peshitta is not explicitly referencing an “egg,” there is no demand upon the translator to render it in this traditional manner which is demanded by translators of the Greek versions.
​
Secondly, the term BARTHA can be translated legitimately as “berry,” and typically refers to a juniper berry from a cypress tree, or a myrtle berry, when it is used in the context of “berry” – both were trees of familiar abundance in ancient Israel – particularly in the Galilee region.

The third reason to choose the rendering of “berry” over “egg” lay in the term the Peshitta has preserved for “scorpion.” In the Aramaic tongue, “scorpion” is EQARBA. It has as its cognate the Hebrew term AQRAB “scorpion.” They are the same term pronounced slightly differently! It is in this cognate that we begin to see the ingenious connection to “berry.”
​
This is seen in that the Hebrew term of AQRAB is polysemous and has as its secondary meaning the definition of “thorn.” 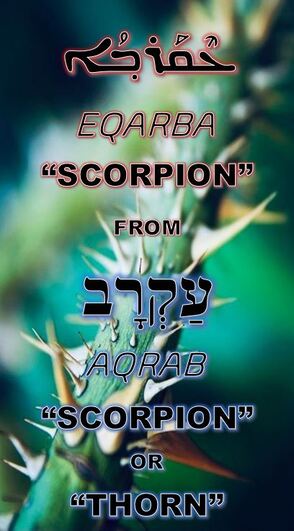 Therefore, it would make more sense if the Messiah were making a play off of the notion of a “berry” in its link to richness of the Hebraic concept behind “scorpion,” being also “thorn,” thus making for an unexpected parallelism in His words. Berries and thorns are paralleled in that they can both be found on the same plant! Additionally, in line with the two previous parallelisms of Yeshua’s statement, one is food and one is not.
​
This linking of BARTHA “berry” to “thorn” is a notion that is even seen in Hebrew Scripture itself, in Isaiah 55:13. 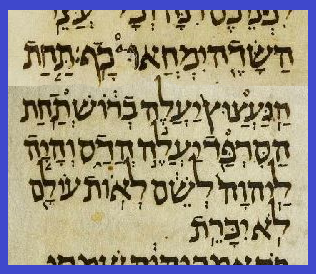 ​Instead of the thorn, the juniper shall rise; instead of the briar, the myrtle shall rise, and it shall be for YHWH for a name, for an everlasting sign that shall not be cut off.
The mention of the “juniper” and the “myrtle” (trees for which BARTHA “berry” is commonly used to reference) in place of the “thorn” and “briar” seems to be the likely source material from whence Yeshua derived His inspiration for these parallelisms, especially when it is noted that Isaiah 55 speaks in other verses about “water” and “bread,” as well – both elements of the parallelisms recorded in Luke 11! This approach to the terms as signifying "berries" and "thorns" is further upheld in the parallel record of this speech as preserved in Matthew 7:16, which comes just a few verses after he speaks of these things, and goes on to mention in that verse both "grapes" and "thorns."
​
The end result, therefore, is an unexpected alignment created in the third Semitic parallelism when we read it from the Aramaic source material: 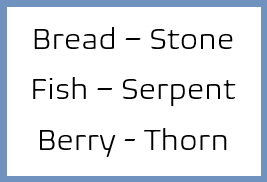 Yeshua was attempting to convey the notion that we should trust the Holy One to the extent a child trusts implicitly in his father to give him good things. There should be no surprise awaiting us as we ask and receive from His generous hand. He can be trusted to give us what we need.

This final statement recorded in Luke 11, when understood from its Aramaic source, provides a further glimpse into what Yeshua was conveying: do not expect the unexpected. And yet, it was His clever choice of terms that were something of a curveball to those attempting to understand His words, for it appeared like it did not align, but upon further consideration, can be seen to be a seamless parallel of thought from beginning to end. The Most High can be trusted even when it doesn’t appear like it to our immediate senses. He desires to give us good from His own goodness, so we must trust Him completely in our walk of faith. We must trust Him enough to know what to expect, even when it seems unexpected!
​All study contents Copyright Jeremy Chance Springfield, except for graphics and images, which are Copyright their respective creators.