The inspired Word of the Holy One is described in many different ways in Scripture.  It is spoken of as being holy, righteous, true, tried, pure, kind, liberty, and so on.  In these things one can see the purpose of the Law, the Torah, the Instruction of the Most High.  It is meant to lead us, to bring us to good things, to godly things – to the Messiah.  One could make the argument that the purpose of the Word is summed up quite well in its description as being a light for us.  It shines in the darkness of what is touted as secular wisdom with a glow that illuminates the truth and burns the shadows away from what is false.  Scripture repeats this thought several times, in fact.  The following verses are some passages declaring this very truth: 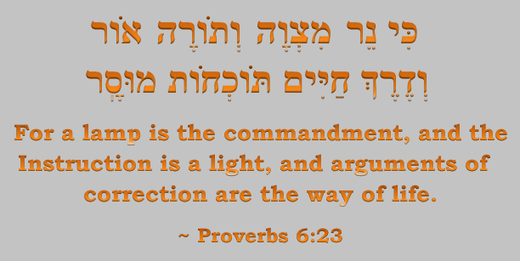 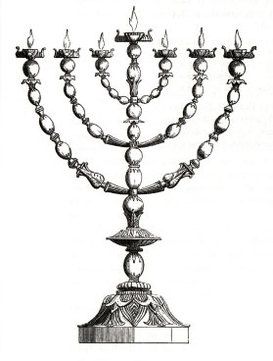 What is of great significance from these passages is the term “lamp” that is used.  This is a translation of the Hebrew word NEYR.  The only time NEYR is ever used in the Torah is to reference the flame-holder that is the menorah, the seven-branched lampstand that illuminated the Holy Place of the Tabernacle.  Outside of the Torah, the term is used the majority of the time to also reference the menorah placed in the Tabernacle.  Understanding the first and overwhelming usage of the term helps us to see that the “lamp” spoken of in the above-quoted passages is meant to be understood in the context of the menorah.  The written Word is thus linked intimately to the seven-branched menorah in the Tabernacle, where the Spirit of the Holy One was to dwell with man on earth.

Given this link, a careful look at the menorah yields some amazing parallels with His revealed Word.  The associations come by paying attention to the details of the menorah’s construction.  This construction is given in the book of Exodus, chapter 25, in the following verses:

And you shall make a lampstand of pure gold.  Of hammered work shall be made the lampstand.  Its shaft and branch, bowl, bulb, and flower from it shall be thus.
(25:31)

And on the lampstand are four bowls as almonds, with a bulb and a flower.
(25:34)

The bulbs and the branches from it shall be thus; all one hammered work of pure gold.
(25:36) 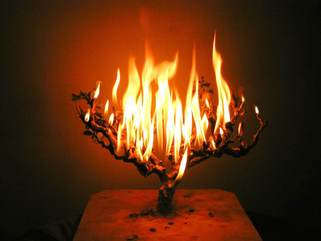 The choice of the menorah’s construction is essentially meant to remind the priests of the first powerful manifestation of the Holy One to Moses: his encounter with the burning bush.  The details of the construction particularly depict an almond tree. The oil lamps atop the seven branches mirror the fire that existed without destroying the bush in the wilderness.
These things point us to the Word of the Most High, which first came to Moses from the burning bush.  Later, at the same locale, when Moses returned with the liberated people of Israel, the text tells us in Exodus 20:18 that at the giving of the Ten Words, the people experienced something extraordinary:

I have translated the above passage as literally as I could in English, in order to draw out the astonishing reality of the Hebrew text.  Most English translations will render the beginning of the verse something along the lines of: “And all the people saw the thunder and lightning.”  This is an understandable translation given the traditionally-understood event, but it fails to properly capture the astounding weight of the spiritual event taking place, since the actual word for “lightning,” BARAQ, is used in the previous chapter in verse 16.  However, in this particular chapter, at the giving of the Ten Words, there are voices and "lamps," as the term LAPPID is rightly translated in my above rendering.  What this effectively shows is that the mountain itself has become a gigantic menorah, with the voice of Yah speaking as He did from the burning bush before to give the commandment. His overwhelming presence on earth at that moment paralleled that of a menorah.  To this thought should be added that Scripture has David curiously calling Yah “my Lamp” in the book of 2nd Samuel 22:29. 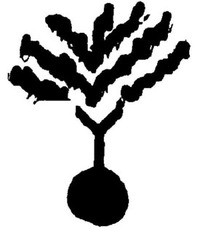 Interestingly, probably one of the oldest depictions of the burning bush / menorah currently known in the Middle East uses two glyphs combined to represent the name of YAH within the structure of the image itself.  A reproduction of the actual glyph is shared on the right.

This ancient glyph-script predates both modern and paleo-Hebrew scripts, and has been also found, quite amazingly, at several ancient sites in North America.  The below graphic displays how the glyphs that would represent "Yah" were combined to be incorporated into the burning bush / menorah structure:

Most definitely, in the combining of the glyphs to make a tree, Yah can be seen as a "Lamp," just as David declared in the verse quoted above!

Beyond the organic parallels of the menorah being an almond tree and representing the burning bush seen by Moses, and thus the Word spoken to him that illuminated his path to redeem Israel from Egypt, there exists further links between the construction of the menorah and the Word of the Holy One worthy of consideration.

When one looks at the various parts of the menorah and disassembles them into their individual pieces, amazing parallels can be perceived.  The menorah, when dismantled into its respective parts, is made up of the following pieces:

The only feature that we are not told about in Scripture is the height of the menorah.  That particular detail is preserved to some degree for us in the Talmud's tractate of Menachot, 28b.  There it tells us that the menorah was eighteen handbreadths in height.  It discusses firstly the height of its base, and then proceeds to discuss the remaining height by referencing what it was already described being constructed as in the Word.  However, since the base is not mentioned in Scripture, a later work known as the Bamidbar Rabbah, an ancient Jewish discussion on the book of Numbers, tells us that depending on how one counts the height, the sum of seventeen handbreadths could also be arrived at instead of eighteen.  Rabbi Elijah ben Shlomo Zalman Kremer, that is, the famous Vilna Gaon, wrote in his work Aderes Eliyahu, that the height of seventeen handbreadths was indeed the correct height. Thus, he upheld the former understanding that the base was not exactly part of the divinely-ordered height of the menorah, giving corroborating testimony that the actual height would have been seventeen handbreadths.  Additionally, it should not be ignored that the term NEYR, meaning "lamp," which was discussed above, is found exactly seventeen times in the Torah itself, mirroring the height of the lampstand itself.

Why are these aspects of the menorah significant?  How do they in any way relate to the Word being a lamp?  It all begins to come together when we consider carefully the contents of the following verse:

This verse tells us that the entrance to His Words give light.  The entrance, or the “door” of His Words, accomplishes this.  The question should thus be asked as to what comprises the “entrance” of His Words.  What could that mean?  It is suggested here that the beginning sentence of each of the five books of the Torah, that text which is referred to explicitly as His “Words” in Psalm 119, is what is being referred to as the “entrance.”  If such a view is taken, the following parallels emerge:

The menorah has seven branches.

The menorah has eleven bulbs.

The menorah has nine flowers.

The menorah’s height is seventeen handbreadths.

The menorah has twenty-two bowls.


These parallels show yet another definitive link that the Word is truly a lamp to us!  The construction of the menorah holds embedded within it clues that point to the Torah itself.  The Word is organic, living, and pure.  It yields blossom and fruit in our lives, and gives light along our path.  Just like the burning bush seen by Moses, at first glance the receptacle is like any other – a book – yet there burns within it a fire that no other tome ever written preserves!  The Word is all these things, and so much more.

Consider the words of the Messiah Himself, recorded in the book of John 10:34, which says:

In case you don’t have a quick reference on you, the Messiah is quoting to them specifically from the book of Psalms, chapter 82, verse 6.  Why is that distinction necessary?  Well, the Law is typically considered by most believers to consist of Genesis, Exodus, Leviticus, Numbers, and Deuteronomy, as previously explained in this study.  However, here the Messiah equates the writings of the Psalms as being on the same level of sanctity as the Torah, the Law!  His inclusion of the Psalms with the Law is not without reason.  Rather, it was and still is normal in Judaism to call the entire scope of Hebrew Scripture HaTorah – that is, the Law.  Messiah was merely drawing out the divine authority of the Psalms to His listeners to prove a point He was making in the context of that particular chapter.

I bring it up to show that He did indeed consider ALL of the Hebrew Scriptures to be Torah, in essence.  Furthermore, I would point the reader to the words of Paul in Galatians 6:2, where He speaks of the Law of Christ.  The Word, the Torah, did not end with the closing of the Hebrew canon commonly entitled the “Old Testament.”  Rather, in Paul’s eyes, the instructions of the Messiah were a continuation of what came before, the Torah expanding by the authority of Yeshua.


What's so important about that detail? 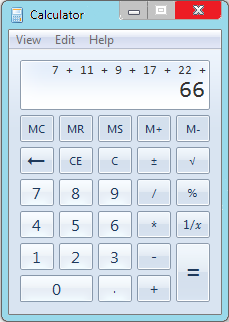 How many books are contained in the full “Torah” of the Word; the "Old" and the "New," the Hebrew Scriptures and the Messianic writings added together?

Open His Word, do the math, and prepare to be illuminated.
All study contents Copyright Jeremy Chance Springfield, except for graphics and images, which are Copyright their respective creators.