In the Shade of Eden's Trees

Where do you hide from the One who is everywhere?

Our first father and mother had it very nice.  Adam and his bride lived in undeniable paradise; a garden planted by the Creator and given as a gift to the first living things blessed to be images of the Holy One.  They were blessed with the overlapping reality of spirit and flesh in a way we could only try to imagine.  With every breath, word, and deed, they were literally making history.  Earth’s first pioneers were tasked with eating of its bounty and filling it with carbon-copies of themselves, all to the glory of their Maker. 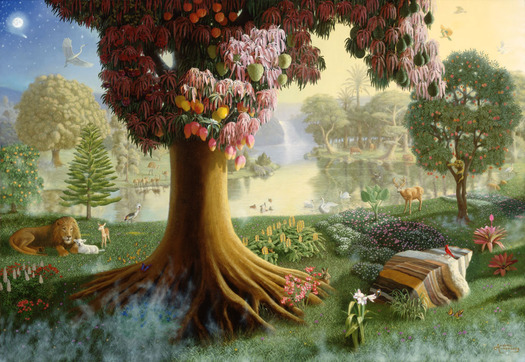 They knew no need; they knew no pain; more so, they knew no fear.  They experienced a relationship with the Creator that no man or woman has since known; nothing stood between them and the Maker of heaven and earth.  Truly, paradise is the term of necessity for what they lived.

The story quickly takes a turn for the worse, however, when mankind engages in absolute spiritual rebellion, choosing to honor the words of the serpent over the words of the Holy One.  Genesis 3 contains the account of this act of false worship and the staggering punishments it brings about for creation.  It is a tragic tale of the loss of trust between those who knew only peace and fidelity.

It is of particular note how Adam reacted to the Holy One after he had engaged in the deadly crime of idolatry by following the counsel of the serpent.  Whereas before his life consisted of peace, and love, and intimacy with his Maker, it immediately turned into one of discord, fear, and isolation.  Read what is recorded in 3:8 as their reaction to the first impending encounter with the Creator after their sin:

The above comes directly from the King James Version of the Bible.  I typically provide very literal translations personally done to maintain a clear presentation of what is actually in the text.  I have shared the verse as it appears in the KJV to bring out a very significant distinction.  Notice that in this version, and admittedly, in every English version which I have ever read, the verse reads that the place where Adam and his wife hide is “amongst the trees of the garden.”  This tells us little, other than that they sought refuge in the lush growth of Eden.  Unfortunately, however, this is actually not an entirely accurate translation.  Provided below is an extremely literal translation of the above verse.  The differences are quite notable: 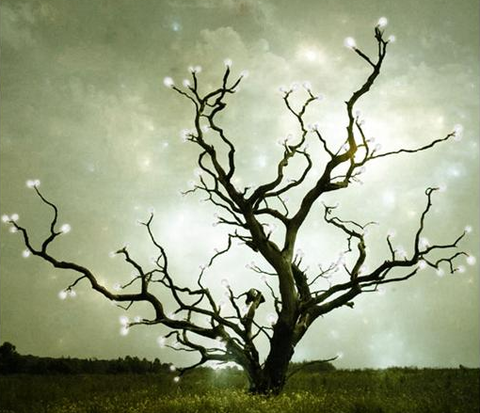 And they heard the sound of YHWH Elohim walking in the garden at the day’s wind, and Adam and his wife hid themselves from the face of YHWH Elohim in the middle tree of the garden.
Do you see the very different ending of the verse in the literal as opposed to the KJV translation?  The standard English translations consistently render something akin to “amongst the trees of the garden.”  This is not what the Hebrew says at all.  Rather, the Hebrew reads, in transliteration: B’TOK EYTZ HAGGAN – “in the middle tree [of] the garden.”  The word EYTZ is the Hebrew word for “tree” or “wood.”  Should one desire to refer to a plurality of trees in the Hebrew tongue the term would be altered to reflect that, yielding either ETZEY (like we see three chapters later in 6:14), or EYTZIM, both terms which would rightly be translated as “trees.” 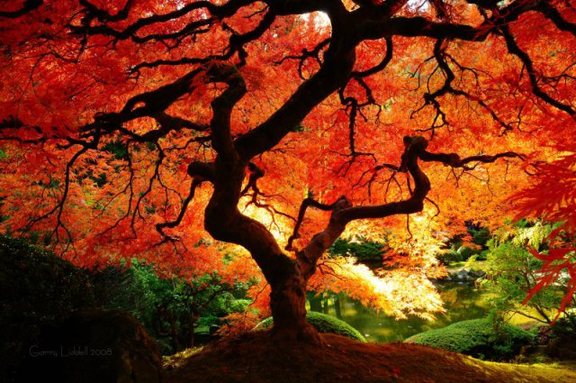 
This is not just a proximity to a tree, but literally “in the tree,” that is, they had apparently climbed up into the boughs of the tree and attempted to conceal themselves.  The tree in which they were hiding was in the middle of the garden, and that can only mean one thing; they hid in the Tree of the Knowledge of Good and Evil!  The very tree from which they ate and sealed their choice to esteem the words of the serpent over the words of their Maker was also the tree in which they sought to hide from His now-fearful Presence!  The one place they were not even supposed to be is the one place they decided to hide, because, when you think about it, such an idea would only be logical; if they were being obedient, that is the last place Yah would look – at least to their enlightened senses. 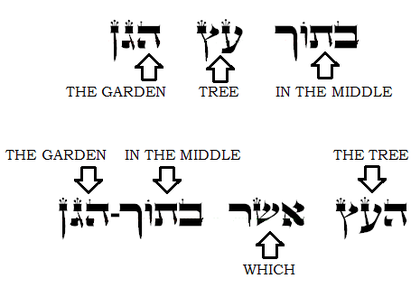 That there be no doubt in the reader’s mind, the Hebrew text itself tells us that this phrase must certainly be speaking about the Tree of the Knowledge of Good and Evil, because it uses the same phrase just a few verses prior to 3:8 to say just that, in Genesis 3:3, where the serpent is speaking with Eve, and she says that the prohibited tree is actually HA'EYTZ ASHER B’TOK HAGGAN – “the tree which is in the middle [of] the garden,” where the KJV again translates it as “in the midst of the garden.”  The woman tells us explicitly right in the text which tree is being referenced when we get to the verse about them hiding in a tree!  This is made undeniably clear in Yah’s decision to remove man from the garden in 3:22, where He says that if He does not, man will go to the Tree of Life, and from it, shall live forever in his state of perversion.
To bring this to an end, it is worthy to note that from the moment Yah calls to Adam and Eve while they are hiding in the tree, all the way through the passing of blame, and through the handing out of the consequences for the crimes committed, there is never mentioned any movement out of the tree.  They apparently had not climbed down out of the tree yet.  That may sound kind of odd to consider at first, but anything else is actually adding to the text, when the text never says they got down for the conversation.  The text presents us with Adam and Eve up in the tree, speaking with the Most High, receiving chastisement for their rebellion.

Such a detail may seem trivial in certain respects, but no detail of Scripture actually ever can be legitimately said to be such.  Rather, this detail is entirely worthy to note.  The curses came upon creation while man was in the tree.  The Holy One doled out the punishments before man ever climbed out of the Tree of the Knowledge of Good and Evil.  When man did finally set foot to earth once more, that foot landed on a ground already so soon suffering from the curse of his choices.  That tree is where the grim reality of separation between the Holy One and mankind took place.  The Instruction of Eden contained only one prohibition; do not eat from one tree.  Man not only ate of it, but then sought to use it to hide himself from His Maker.  This is so important to see, because we know that is was on a tree that Yeshua also was handed a death sentence.  It was on a tree with Yeshua that all the consequences of good and evil came into clear focus.  It was on the tree with Yeshua that a separation between the Holy One and man was realized, and subsequently, mended.  Galatians 3:13 says it so blatantly: 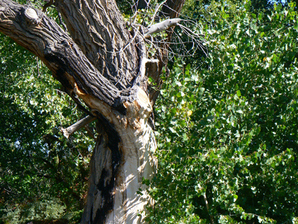 But as for us, the Messiah has ransomed us from the Instruction’s curse, and He was in our stead a curse, for it is written: “Cursed are all who are suspended on the wood.”
Only through Messiah’s similar presence on the tree would man be set free from his vile idolatrous act.  Adam and his bride attempted to cover their nakedness in the tree, and Messiah was shamefully exposed for all to see hanging from the cross.  As they received the curses and the rejection of the Holy One, so too did Messiah hang cursed from the wood, crying out His feelings of rejection in the darkness on the cross.


Thankfully, note well in Genesis 3:15 that the first promise of a Redeemer for man was spoken to the serpent while man was yet in the tree:

These words surely echoed into the ears of man while his hands and feet clung to the rough wood of the Tree of the Knowledge of Good and Evil.  The Redeemer would come and make right their horror.  It was on a tree that man received curses for his sins, and so it would be on a tree that those curses would be brought to an end.
All study contents Copyright Jeremy Chance Springfield, except for graphics and images, which are Copyright their respective creators.