The above image is a photo of the world's oldest carbon-dated complete Sefer Torah (scroll containing Genesis thru Deuteronomy), at around 850 years old. The scroll is opened up to the book of Exodus, beginning on the top right of the right column with Exodus 14:28b, and ending at the bottom left of the left column with the very first word of Exodus 16:34 (it is cropped for space in this study). The unique staggered writing in the right column is typically called Shirat HaYam - "Song of the Sea," or known also by the title Az Yashir Mosheh - "Then Moses sang," the song that was sung after the miraculous parting of the Red Sea and the deliverance of Israel from Mitzrayim (Egypt).  Most people would know it as the “song of Moses.”

The text of the song is offset from the rest of the surrounding verses in such a way that the reader knows immediately that a special account is about to be read.  According to the strict rules for writing a scroll in Judaism, every kosher sefer Torah must be written in the curious fashion that preserves the unique transmission of the song as found in Exodus 15.  If you open up any sefer Torah today to this same passage, you will find that it is going to be practically identical, differing perhaps only in handwriting and script form.  The fact that this scroll is eight and a half centuries old, and the tradition was already in place at that early time, shows how important it was to maintain consistency in how a scroll was transmitted in the copying process.

Why is this format so significant?  What is the purpose in preserving it for generations to be immediately identifiable as the “Song of Moses?”  The event of the parting of the Red Sea and the rescue from Pharaoh’s enslavement is one that needs to be forever remembered, for it displays the lengths the Most High went to in order to bring freedom to His people.  This special orientation of the text serves to cause that miracle to be easily identifiable in the text. 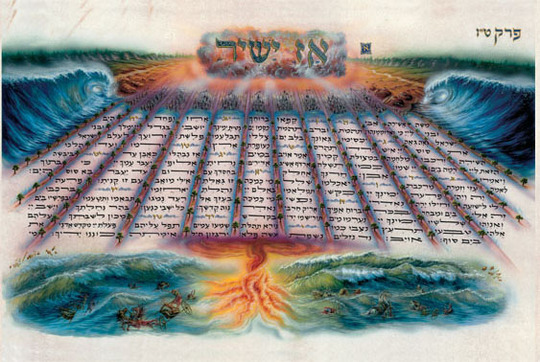 Additionally, the way the text is laid out, another thought is allowed to be considered; the unique staggered presentation of the Hebrew here is intended to evoke the idea of two walls of water on either side, with a path of dry ground going down the middle for the Hebrews to follow, as if it were to be seen from an aerial view.
In the below image, I have digitally highlighted the portions of text that comprise the “path” through the waters.  If viewed with this in mind, the central path becomes its own intriguing declaration, which could be read separately as such: 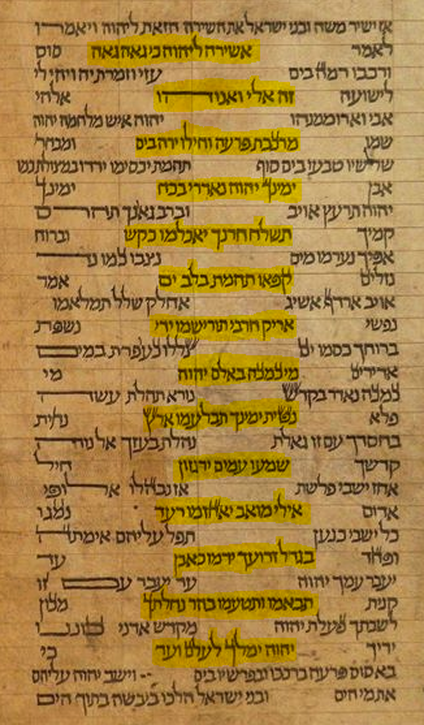 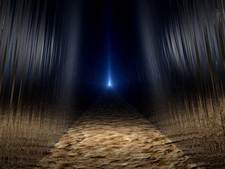 If read in this way, a cohesive thought is presented creating a condensed version of the whole. If taken as such, Moav (Moab) becomes a title for His people, for the name literally means "From the Father," and in this manner would even be an allusion to the redemption of Moav that would be instigated later in the person of Ruth, and her integral participation in the ancestry of the Messiah.  Thus, the path through the sea becomes so much more to our spiritual eyes.  It is the way that leads us down the corridor of time and history, ultimately to the One who will redeem us from Spiritual Egypt and the oppression of all sin. 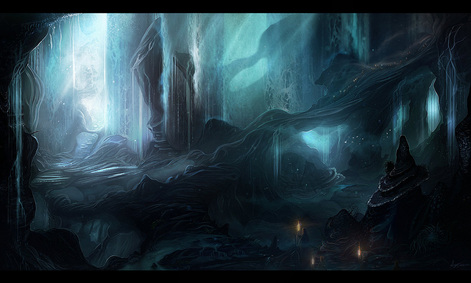 Additionally, the grammatical inflection of Yashir "sang" at the beginning of 15:1 is in the imperfect tense in the Hebrew, which shows that they were "about to sing," or it could be understood as something that will happen at a later date. It could be taken to mean that Moses and the sons of Israel will one day sing this song.  In fact, Judaism says that the resurrection from the dead is mentioned in the Torah by understanding this very word with its curious grammatical inflection! 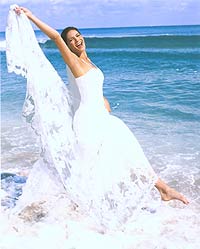 With this in mind, in Revelation 15:2, we read about a group of overcomers during the persecution of the Beast who are seen standing on a sea, instead of walking through it.  They follow the Lamb wherever He goes; even to walk upon the waves of the sea!  Furthermore, in 15:3, it tells us that they sing "the song of Moses" and the "song of the Lamb."  The “song of Moses” is that found in Exodus 15, introduced with a word that can mean it will be sung at a future date -- which is exactly what we see in Revelation 15:2. The “song of the Lamb” is that which is recorded in 15:3-4.  When one properly understands the weight of the “song of Moses,” and how it points us all the way to the end of time, to the redemption and resurrection we can obtain only through the victorious faith of the true Lamb of the Holy One, Yeshua, then His Word suddenly takes on a whole new meaning and tone.  A praise song sung spontaneously on the shores of the Red Sea so long ago holds a prophetic rhythm that beats all the way through time, unto the fulfillment of all things!
All study contents Copyright Jeremy Chance Springfield, except for graphics and images, which are Copyright their respective creators.