SEVENTY LIGHTS  FOR THE NATIONS

The Tabernacle built in the wilderness by the contributions of the artisans and congregation of Israel, and constructed by the Spirit-filled carpenters Bezalel and Oholiab at the direction of Moses, was for the sole purpose of creating a holy place in the midst of a people scarred and tainted by sin.  The Tabernacle served as the designated arena within which the Presence of the Most High could commune with His people.  It was the central location of all the religious experiences of the Hebrew people for their many years of wandering in the wilderness, as well for a good time after entering the land of Canaan in conquest to capture their promised property. 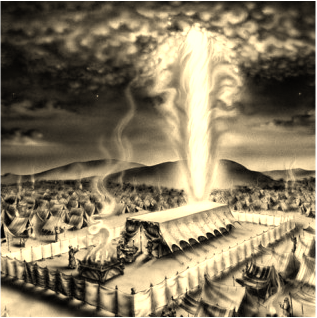 At this Tabernacle, beyond the courtyard, where priests and the repentant prayed together and served the Holy One in careful worship and sacrifices of blood, there was the Holy Place – the inner tent into which only the priests could enter.  This room is where incense was burnt on the golden altar, where the smell of the showbread wafted from the golden table in the quiet peace.  This solemn space was lit only by the menorah, the lampstand with seven individual lights burning atop its branches.  The seven flickering lights of the single menorah allowed the priests to do their daily service before the Presence of the Holy One in this Holy Place.

The priests attended to this daily dedication in the Holy Place, enabled to see their required religious activities due to the light produced by the menorah in their midst.  Although this was their special service alone – not something in which the people of Israel could partake, the congregation yet had a role in this rite, even if it was from afar.  The book of Exodus 27:20-21 tells us about the vital role played by the congregation who could not enter into the inner tent:

And you shall command the sons of Yisra’El, and they shall bring to you oil of olive, purely beaten for the light, to have the lamp burn continuously.
In the Tabernacle of Appointed Meeting, from outside of the veil which is before the Testimony, Aharon and his sons shall order it from evening until morning before YHWH;  A statute lasting for their generations, on behalf of the sons of Yisra’El. 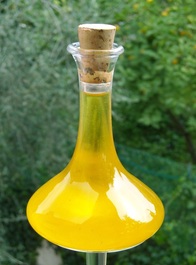 The responsibility for lighting the lampstand fell not to the priests, surprisingly, but to the people!  Those who could not enter into the Holy Place yet provided the oil for the menorah that gave light to those who could.  The light of the menorah that allowed the priests to perform their necessary duties, therefore, was essentially on behalf of the congregation of Israel!  This was Israel’s menorah, Israel’s light before the Holy One!

With the passage of time, and coming of the King, David, we read that his heart desired a permanent dwelling for the Presence of the Holy One of Israel.  David longed to build a structure that would not be subject to the whims of the people to move it here or there, but would serve as a locus-point for the entire nation to seek.  This desire was for a permanent Temple structure to be built.

Unfortunately, he was prevented from actually performing the building of this Temple, and such honor went instead to his son and successor, Solomon.  Solomon enacted all the efforts to have the Tabernacle transformed into the Temple, and yet, he did so not based on his own calculations, but on the Spirit-revealed pattern of the Holy One made known to his father, David!  This particular matter is discussed in the book of 1st Chronicles 28:11-15, and 19, which says:
And Dawid gave to Sh’lomoh his son the pattern of the porch and its houses, and its treasuries, and its upper and its inner chambers, and the house of the covering,
and the pattern of all which he had by the Spirit with him, for the courtyards of the House of YHWH, and for all the rooms surrounding, for the storehouses of the House of Elohim, and for the storehouses of the holy [things].
And for all the courses of the priests, and the Levi’im, and for all the work of the service of the House of YHWH, and for all the utensils of service for the House of YHWH:
for the gold by weight for the gold, for all the utensils of service, and the service, for all the utensils of silver by weight, for all the utensils of service, and the service,
and the weight for the menorahs of gold, and their lamps of gold, by weight for the menorah, and for the menorah and her lamps, and for the menorahs of silver by weight, for the menorah and for her lamps, according to the service of menorah and menorah.
…
“The entirety [of it] was by the writing from the hand of YHWH to me, to make me understand all the works of the pattern.”
Did you note what is revealed in this passage?  A detail of great merit is included here: there was more than one menorah in the Temple!  While the Tabernacle only contained one menorah to light the Holy Place, the Temple would use multiple menorahs to illuminate the inner room where the priests attended to the bread and the incense!  The total number of new menorahs is not given in this passage.  Rather, we must go to 2nd Chronicles 4:7 for that piece of information for how many Solomon had made:

And he made the menorahs of gold, which was according to their ordinance, and set them in the Temple, five on the right hand and five on the left.

The total number of new menorahs was thus ten!  These would give light with Israel’s original menorah to illuminate the Holy Place.

But for what reason are the additions?

What purpose do they serve? 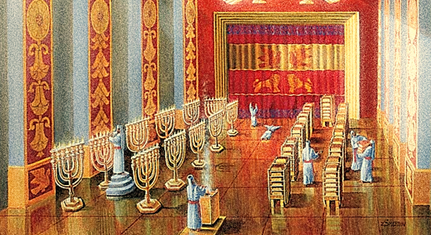 While the physical reason could be said to give light to the larger Holy Place of the Temple as opposed to a small Holy Place of the Tabernacle, there is a much more significant reason when we look at the spiritual side.  Just as the original menorah was lit by the contribution of the people of Israel, and thus signified their presence in the Holy Place, even though they could not themselves enter in, so too, do these additional menorahs point spiritually to the contributions of others!

Seventy lights were added to the Holy Place by the addition of ten new menorahs!

But why? Why seventy additional lights to illuminate the Holy Place?

The answer is found in the book of Isaiah 2:2-3, where the prophet declares the following:

And it shall be in the latter days, the Mountain of the House of YHWH shall be established in the top of the mountains, and shall be raised up over hills, and all nations shall flow unto it.
And many peoples shall walk, and they shall say, “Let us walk, and ascend to the Mountain of YHWH, to the House of the Eloah of Ya’aqov, and He shall instruct us from His paths, and we shall walk in His ways, for from Tsiyon shall go forth Torah, and the Word of YHWH from Yerushalaim.”

To this reality is added the words of the Holy One through the prophet again in Isaiah 56:6-7, which say:

“And the sons of the stranger, those attaching themselves unto YHWH, to minister to Him, and to love the Name of YHWH, to be for Him servants – all guarding the Sabbath from polluting it, and are binding with My covenant,
I shall bring them to the Mountain of My Holiness, and they shall rejoice in the House of My prayer; their burnt offerings and their slaughterings are acceptable upon My altar, for My House shall be called a ‘House of Prayer for all peoples.’” 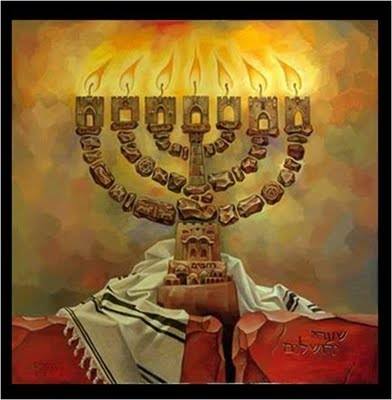 This tells us that all nations will have a part in the worship of the Holy One – not just Israel!  While the Tabernacle was built for the people of Israel, for all who were a part of the congregation of His inheritance, the Temple was the expansion of that desire for people from all nations to worship Him.  It must include the spiritual contribution of all nations.  These added lights represent that wonderful reality. 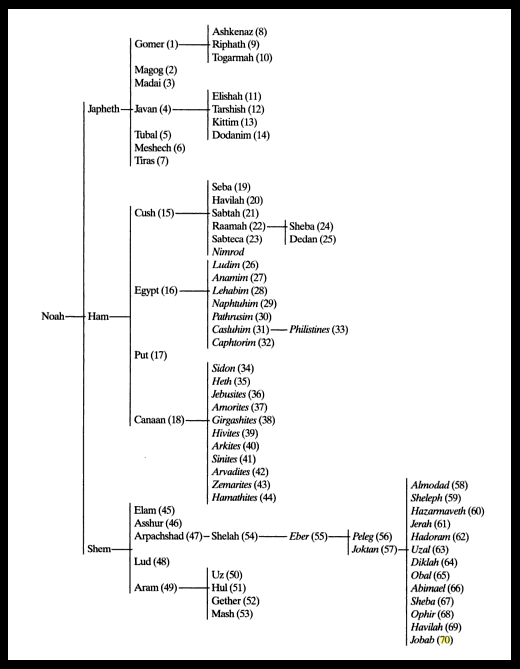 Genesis chapter 10 has a long list of all the original nations who came forth from the sons of Noah, who are now represented by all peoples in the world.  The list of those peoples total the number seventy!  Therefore, the total number of added lights in the Temple’s Holy Place aligns perfectly with the number of nations according to the Word, from whence have come all peoples.
Sin separated man from the Presence of the Holy One.  Sin put us in spiritual darkness, but the Holy One has provided a way to return back to Him, to reconnect to His love and forgiveness.  That way is found in His Son, Yeshua, who, in the book of John 12:46, made an amazing claim concerning His own contribution: 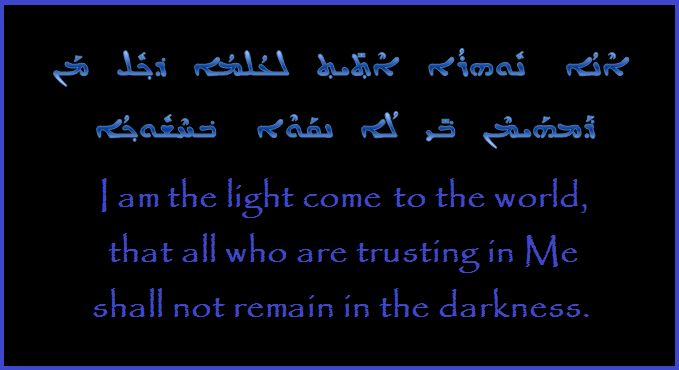 The term Messiah uses here is NUHRA, one of several Aramaic terms that mean "light."  While Israel and the nations have a light of contribution in the Presence of the Holy One in the Temple, the Messiah claims to be the very light of the world - the one light to which all men must respond.  This particular Aramaic term of NUHRA is the exact same term used in the ancient Aramaic translation of Genesis 1:3, which says in the original Hebrew: 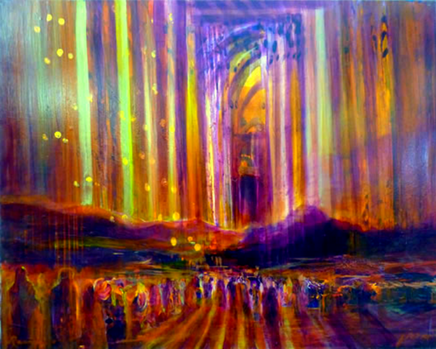 The ancient Jewish commentators read this and understood the term NUHRA / “Light” to be referencing the Messiah who would one day come.  Thus, they give this very term as one of His titles, as we see made clear in such ancient Jewish works as Yalkut Shimoni 56, and Pesikta Rabbati 62,1.  The concept that the “light of creation” is actually the Messiah arose from the presence of the word NUHRA in the Aramaic of Messianic verses such as:

The people that walked in darkness, they saw a great light; those dwelling in land of death’s shadow - a light has shone upon them.
~ Isaiah 9:2

I, YHWH, have called You in righteousness, I will hold-tightly with Your hand, and I will keep You, and I will give You for a covenant to a people, for a light to the nations.
~ Isaiah 42:6

The term NUHRA appears in the Aramaic versions of the above verses, which made the rabbinic commentators see that this concept of “Light” is another way to reference the Messiah.  By Yeshua’s using this term for Himself back in the book of John 12:46, He was trying to show the people that the darkness of sin could be obliterated if only man would come to Him.  The entire world has access through the Righteous One to be illuminated in the pure worship of the Most High at His Temple.  Hidden in the light of Holy One – the complete number of menorahs at the Temple – would lay the true Light that would bring men from all seventy nations out of darkness  – Yeshua!