WINGS OF A DOVE

​
Yeshua’s baptism was unique among all other immersions recorded in the New Testament. The very fact that the Messiah himself, whose observance of the Torah was equaled by none, would endeavor to undergo a baptism is important in its own right, but what we are told occurred at that immersion is also incredibly significant. The waters of the river Jordan received Him and witnessed the moment that would mark the focus of His faith-filled purpose on this earth. 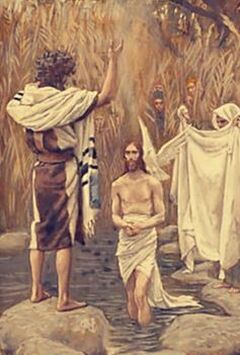 Recorded in all four Gospel accounts, the baptism of Yeshua was the point His Messianic ministry truly began. From that moment the weight of redemption lay upon His shoulders as He taught the Word and its highest performance to the myriads of Israel.
​
The occasion was unlike any other immersion, not due just to the person involved, but also regarding the unparalleled heavenly reaction that happened when Yeshua rose from the waters. That event, too, is preserved in every Gospel account. 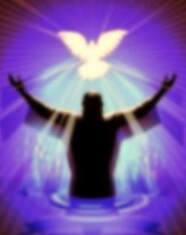 Consider now what the texts tell us occurred.

Yet, when Yeshua was immersed, at once he ascended from the waters, and the heavens were opened to him, and he saw the Spirit of Alaha who descended as the dove and came over him.
~ Matthew 3:16

And at once, when he ascended from the waters, he saw that the heavens split, and the Spirit, as the dove, who descended over him.
~ Mark 1:10 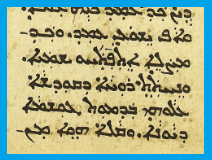 ​And Yuchanan testified, and said, “I saw the Spirit who descended from the heavens as the dove and remained over him.”
~ John 1:32
In each account, the heavenly response is the descent of a dove over Yeshua upon His ascent from the waters. The text tells us that this is no ordinary dove. It is rather the Holy Spirit manifesting in the form of a dove! 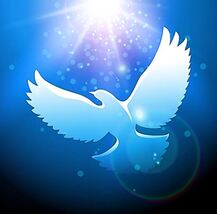 What is interesting here is that nowhere else in Scripture is the Holy Spirit referred to as a dove. The imagery is presented here matter-of-fact and without question or elaboration, and is yet never again touched upon. However, when we consider the testimony of Judaism in other ancient texts, such imagery is seen to have been readily familiar to the faithful.

​For example, one ancient Aramaic translation of the Hebrew Bible, known as the Targum, translates The Song of Songs 2:12 phrase of the “voice of the dove” in a much different manner. Here first is the original text from its Hebrew source.

The flowers appear on the land; [the] time of the singing [of birds] has arrived, and the voice of the dove is heard in our land.
The Targum text renders the above Biblical phrase to be a reference to the Holy Spirit!

What Scripture calls the "voice of the dove" was understood by the ancient Aramaic translator to be the voice of the Spirit!

Additionally, the Talmud also makes a unique connection between the Spirit and a dove. 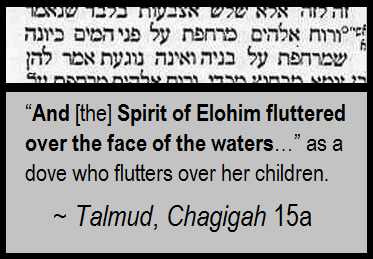 In these two passages is clearly shown that relationship of the Holy Spirit to a dove. In addition to these, the reference to the Holy Spirit as the Shechinah (Dwelling-Presence of the Creator) is encountered repeatedly in ancient Jewish religious literature—too numerous to share—from the Talmud, to the Midrash, and so forth, using the phrase KANFEI HASHECHINAH “wings of the Shechinah.” 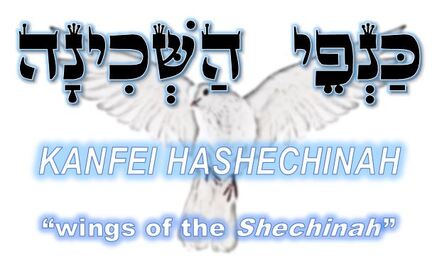 The notion of the Shechinah having wings thus fits perfectly with the imagery of the Holy spirit as a dove! In these examples we can therefore see that what the Gospels present would have been common knowledge to the religious Jews of Yeshua’s time: the Holy Spirit was understood to be referred to as a dove! 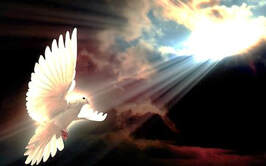 In the case of the New Testament texts, this portrayal of the Spirit as a dove is done only once in connection to the ordination of Yeshua as the Messiah.

​What is intriguing is that Judaism has often preserved the concept of a link between the Holy Spirit as a dove, and even in this symbolism along with the investiture of the Messiah into His Messianic role, as the following quote from the text of the Zohar clearly shows. 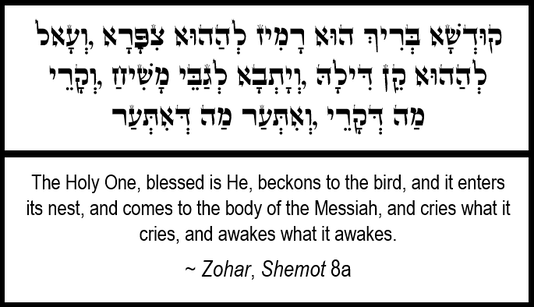 ​The “bird” mentioned here is intended to signify none other than the Holy Spirit / Shechinah, and it is shown to come upon the Messiah, make an undisclosed statement, and “awaken” Him to His calling! 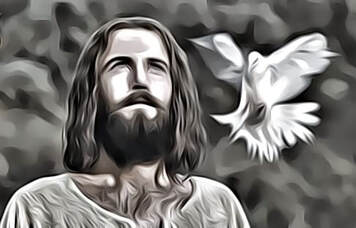 This is effectively exactly what we find in the baptism accounts of Yeshua: the Spirit falling upon Him as a dove!
The Jewish text of Bereshit Rabbah also makes a connection to the Spirit, water, and Messiah--and the concept of "repentance." 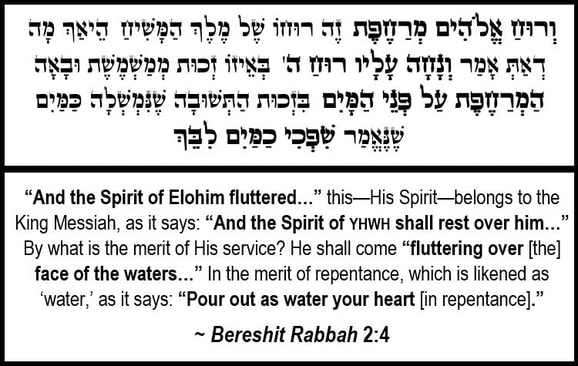 This passage quotes from Genesis 1:2, Isaiah 11:2, and Lamentations 2:19 to highlight the inherent link between the Spirit, the Messiah, water, and repentance. These are the exact same elements at play in the baptism of Yeshua!
The accounts of Yeshua's baptism also preserve three mentions of a divine voice making a statement of affirmation of His role as the “Son”—the Messianic mantle given to Yeshua! This aspect seems to connect to the above passage from the Zohar which says that the dove utters certain cries to the Messiah.

​…and the voice was from the heavens, which said, “You are My Son, the Beloved; in you I delight!”
~ Luke 3:22
The expectations in Judaism of the Messiah being linked to the Holy Spirit as a dove at His inducement into His Messianic role is thus quite evident. Elsewhere in the text of the Zohar we also find a further reference to the Holy Spirit as a dove and its actions at the Messiah's ordination. 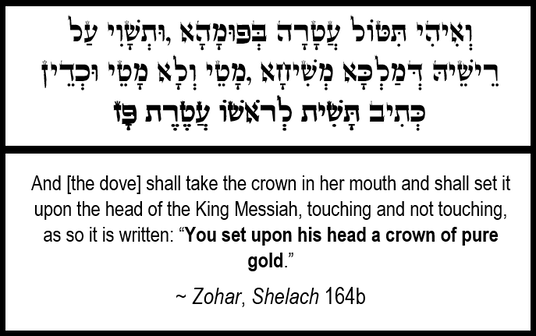 Quoting from Psalm 21:4, the assertion and implication of this passage is worth further discussion, as it might not at first seem to fit the imagery of Yeshua’s baptism, but upon further consideration, we will see that it seamlessly aligns with what we know about the role of Messiah. 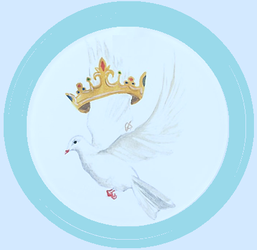 We know that Yeshua is symbolically depicted in the book of Revelation 19:12-13 wearing “many crowns,” and referred to as “the Word.” 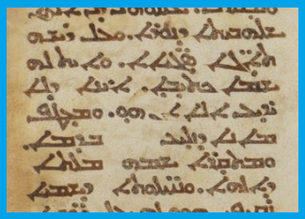 ​
​12  And on His head were many crowns. And there was a Name written on it, which none knew, except for He himself.
13  And He was enwrapped [in] an outer garment soaked in blood, and His name is called ‘The Word of Alaha.’
It is of interest that the Aramaic text quoted above in the ancient Crawford Codex of Revelation refers to the word “crown” with the term TAGA, which is most often encountered in Judaism in reference to the small flourishes found on many Hebrew letters when written upon parchment for Torah scrolls, tefillin, or a mezuzah. It is usually spoken of in the plural in that context—TAGIN. The accompanying image from a Torah scroll has instances of TAGIN circled in red.
The imagery here is rich and implies a unique portrait of the holy text of the Torah—which constitutes the Word of the Most High. It is in the Torah, in Exodus 28:36-38 that we see a crown with a Name upon it worn by the High Priest when ministering in the Temple. 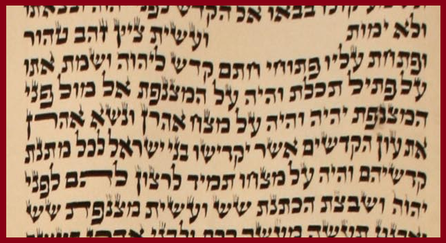 36  And you shall make an ornament of pure gold, and engrave upon it engravings of a seal: HOLINESS TO YHWH.
37  And you shall place upon it a cord of blue, and it shall be upon the turban, facing the front of the turban it shall be.
38  And it shall be over the forehead of Aharon, and Aharon shall bear the iniquity of the holy things which the sons of Yisra’el set apart in all their holy gifts. And it shall be over his forehead always for him to be accepted before YHWH.
The High Priest wearing this crown / ornament of pure gold carries a merit that allows him to bear the sins of all the people in their various acts of worship, allowing him to be accepted favorably before the Holy One. This object is referred to in the Hebrew by the term TZITZ. Interestingly, this word is used in the Hebrew language to refer to several different things, and one of its definitions, oddly, just happens to be “feather.” 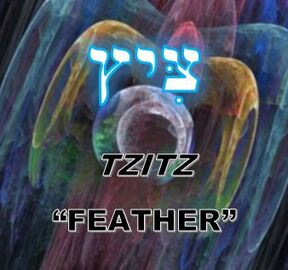 One could therefore say that the “crown” upon the High Priest’s forehead is at the same time a feather! The High Priest thus carried over him in this golden crown the inference of a bird--the symbol for the Holy Spirit!

This might seem like an strange detail to bring out, but the reason this is significant is that Yeshua is said to serve as a High Priest—not in the earthly Temple, but in the heavenly! He possesses this unique responsibility due to the fact that He lived an entire earthly life of supreme righteousness, embodying the Torah through His deeds and thoughts without fail.
​
The High Priest alone is given this golden ornament / “feather” to wear in his ministry, yet the rest of the people are given instead a version made of leather, which Scripture calls TOTAFOT, and which is popularly referred to in Judaism as tefillin, and as “phylacteries” in English.

​The reason for this will be made clear shortly. 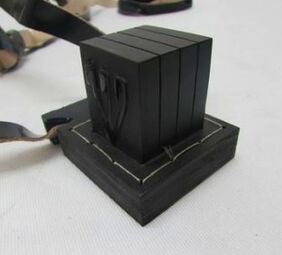 The Talmud tells us the merit of wearing tefillin equates to the person keeping all of the Torah! 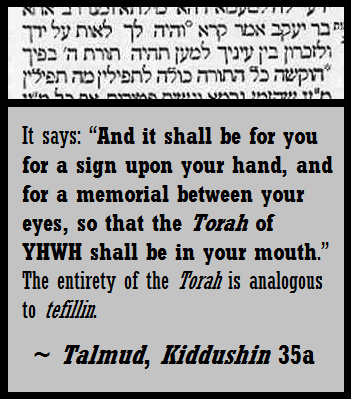 This high spiritual merit is a hint to the Messiah, who keeps all of the Torah and by whose merit, if we attach ourselves to Him, we are redeemed from the consequences of our own sins.

So what does all this have to do with the Holy Spirit as a dove?
​
There is a unique story in the Talmud that aligns with this entire topic. It concerns a Jewish man named Elisha (not the prophet), whose adherence to performing the commandment of tefillin merited a miracle to happen for him. 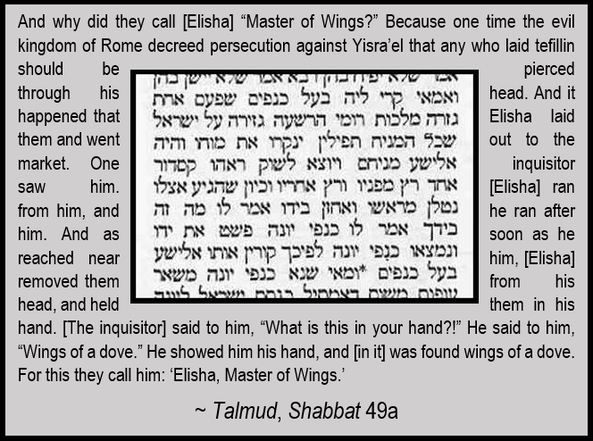 In this amazing account, we find that tefillin, the performance of which are linked to fulfilling the whole Torah, are also connected spiritually to a dove! 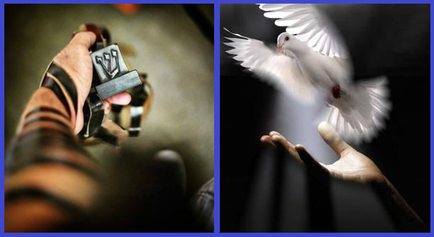 In fact, due to this miracle, the Shulchan Aruch HaRav explains it has become customary for many to wrap up the straps of the head tefillin in such a manner when not in use that the form resembles a dove and its resting wings, which is referred to as wrapping “wings of a dove.”

Some wrap both the head and the hand tefillin in this unique way, following the recommendation of the Rebbe Rayatz--Yosef Yitzchak Schneersohn. So the reader can understand what this looks like, the following image of my own Rabbeinu Tam pair of tefillin show the straps wrapped in the "wings of a dove" manner following this custom. 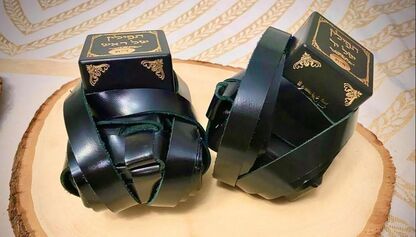 All of this points us back to Yeshua at His baptism when the Holy Spirit came over Him as a dove to signal His Messianic calling.

Upon the sides of the tefillin that is laid upon the head are embossed the Hebrew letter Shin. With but a little bit of imagination, the letter Shin looks very much like a dove descending with wings spread in flight. 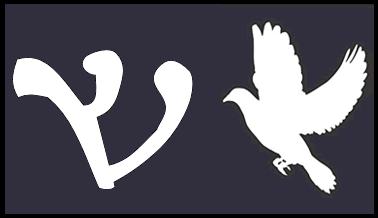 As the Spirit descended upon Him in the form of a dove, this signaled in a symbolic sense the letter Shin of tefillin--the merit of all the Torah--being set as a seal upon Yeshua's ministry. He would have the fullness of heaven's authority to perform the calling only the Messiah could accomplish.

At the baptism of Yeshua the Spirit came as a dove to show the people present that the Shechinah was with Him in His Messianic calling to live a life of complete fulfillment of the Torah, to stand in our place with merit unmatched, carrying us on wings of favor to stand accepted before the Holy One of Israel!
​All study contents Copyright Jeremy Chance Springfield, except for graphics and images, which are Copyright their respective creators.