The synoptic accounts of Messiah’s life are witnesses attesting to the truth of His life and ministry.  Matthew, Mark, and Luke provide articulate testimonies of His teaching, showing us that He lived and interacted throughout the land of the covenant people of Israel.  Events repeated in these accounts show us that we can trust what has been preserved for us down through the ages as truth.  It is a great blessing to have them in our hands! 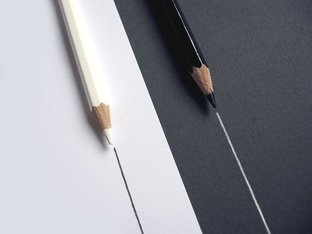 What is one to do, however, when apparently meaningful differences appear between two otherwise consonant accounts?  When glaring distinctions seemingly exist between books, it is logical to ask why they exist, and which reading is correct.  The nature of such variant details in these types of accounts is one that critics of the Bible, both sincere and hostile, will bring up as evidence worthy of attention.  What is to be made of these things?

It is my perspective that His Word does not contain contradictions or glaring errors that possess no reconciliation.  This perspective comes not from one of blind faith, but from dedicated study of the ancient texts, and seeking to understand the factors surrounding linguistics and translation nuances of those texts in the early days of textual transmission.  In this perspective, I have seen that what is largely brought forth as a witness of dissonance and unreliability is explainable in some fashion by careful examination of the text.
This study is focused on one example of such a detail of apparent dissonance between synoptic accounts, and how the Word actually displays complete harmony if the details of the matter are carefully examined.  The example that will be discussed here is that found between the books of Matthew 11:19 and Luke 7:34-35.  In the context of these accounts, Yeshua is admonishing the Pharisees for their lack of trust and unwillingness to accept the witness of John the Baptizer.  He then compares the austere character of John to His own actions, which were much more inclusive than the set-apart, priestly role John inhabited.  Here is the text of Matthew as it appears in many Greek manuscripts ( Aleph, B* W 202 1319 2145):

The parallel passage that appears in Luke 7:34-35 is essentially the same, except for a subtle detail of difference that appears at the end, in verse 35.  Note the change:

The difference between the two lay in the variant Greek terms of ERGON “works” and TEKNON “children.”  The Greek terms are quite different in pronunciation as well as in spelling, sharing only two letters, and thus are words that are no writer in Greek would easily confuse.  These are basic vocabulary words in the Greek language that any student or reader of Greek could distinguish with no issue.  Therefore, how could such different words arise from the sayings of the Messiah?

It is understood that Matthew was actually present for this declaration by Yeshua, and that Luke only came onto the scene after the fact, and recorded as much testimony from eyewitnesses as he possibly could obtain.  Thus, his record is second-hand, but still incredibly prolific in regards to content.  Still, the reader is left to wonder: which reading is to be preferred?
Is wisdom justified by her works, or is wisdom justified by her children?

Which makes more sense to the reader? 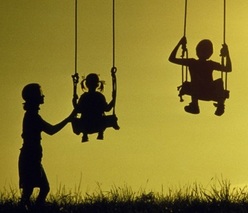 Does wisdom have children?  To answer in the affirmative here is ultimately problematic, for there is no place in the Word which proclaims that wisdom has children – except the passage in question, which itself is possessive of a variant reading. 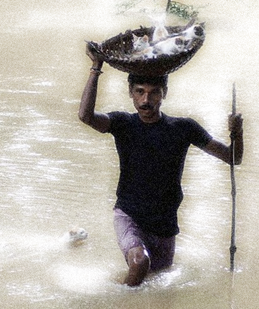 Does wisdom have works?  Now this we actually find some merit for in the Word.  This declaration by Yeshua almost sounds like a proverb, and while there is no specific proverb that reads either way that has survived in any ancient text to this day, we can go to the book of Psalms and Proverbs to shed some light begins in this area.  Let’s look at Psalms 104:24 first: 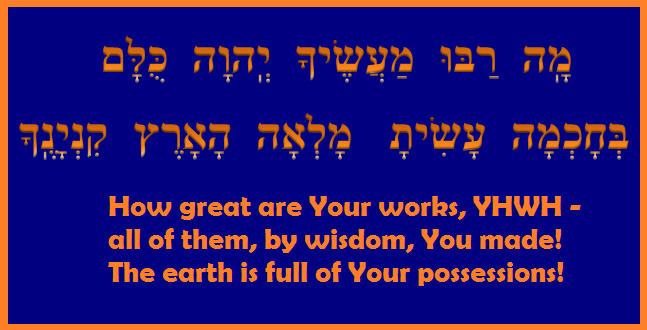 This passage is of importance because it states that wisdom has works / deeds.  This detail aligns perfectly with the phrase Yeshua uses, doesn’t it?  This would appear to promote the reading that wisdom is justified by her deeds, not her children!  Wisdom produces correct action, proper construction of character, and many such aspects.  The reading would make sense if viewed in this manner.  Let us turn now to Proverbs 9:1. 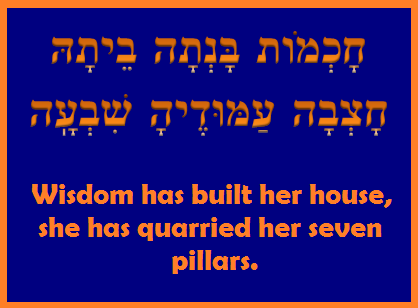 In this passage we see that wisdom has a work, or more specifically, a construction!  Wisdom builds something: a house with seven pillars!  Now, this is spiritually symbolic language, of course, but the concept is legitimate: wisdom creates, wisdom erects something of value.  This is certainly talking about deeds and actions, not children.  But there is also something contained in this proverb that is very noteworthy to our discussion.  As I wrote above, it appears that Messiah’s original statement was spoken as if it were a proverb, and yet, no proverb is explicitly preserved as such for us.  However, when we consider what He said in its entirety – about eating and drinking wine, and justification of wisdom by her works, and pair it with the context of this statement in Proverbs, and then read the verse that comes immediately afterwards (9:2), a connection emerges that cannot be coincidence: 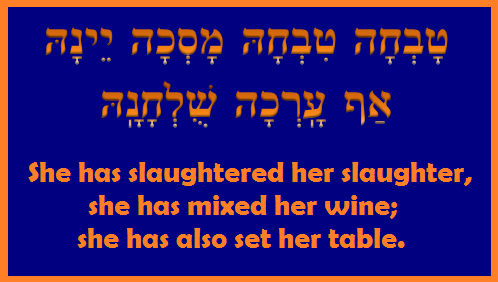 Look what we see wisdom doing in her “work” – preparing food and wine!  Messiah came as one eating and drinking, and speaks of the works of wisdom in this regard!  For those who had ears to hear at this point in His declaration, perhaps they heard the echo of Proverbs 9:1-2 in His words.  Thus, although not a verbatim quote of a proverb, His words were an allusion to the proverb about the works of wisdom!  This detail aids in setting the proper Biblical precedent for the statement made about wisdom having works / deeds.  It displays that the choice between the two readings from Matthew and Luke can be zeroed-in to that of “works / deeds,” and not “children,” based solely off the lack of wisdom ever being said possess “children,” and the salient witnesses of Scripture that proclaims wisdom has “works.”

While it may be easy to come to a conclusion based off that alone, there is still the pressing matter mentioned in the beginning of this study: two parallel passages of Scripture yet preserve differing ideas – even if it can be proven which one is the proper idea and which one is the improper idea!  This appears at first glance to be contradiction in the Word, but it is actually not the case.  Rather, this is an instance of an unfortunate translation into the Greek language from the original Aramaic.  The problem that exists in the text that is found in Greek-based passages will be seen to disappear when approached from the Aramaic of the Peshitta text.

How is this reconciliation facilitated?  Here’s where it gets very interesting!

The Greek text of Matthew 11:19 has a unique factor about it that merits bringing forth.  While many texts possess the reading of ERGON “works / deeds,” other Greek texts have a variant reading of TEKNON “children” (B2 C D L Θ Ë1 33).  Similarly, Luke 7:35 has a unique factor about it that also merits bringing forth.  While almost all Greek texts possess the reading of “children” in this verse, there are a couple texts (Aleph*  and  Aleph 2) that actually read ERGON “works / deeds.”  Therefore, both verses in both books have variant readings that both read “children” and “works / deeds.”  Isn’t that a strange detail?  How could that arise?  This is where returning to the Aramaic text at last illuminates the matter for us and settles any possible unrest.  There is no true contradiction.

Here’s how Luke 7:35 reads from the Aramaic Peshitta text: 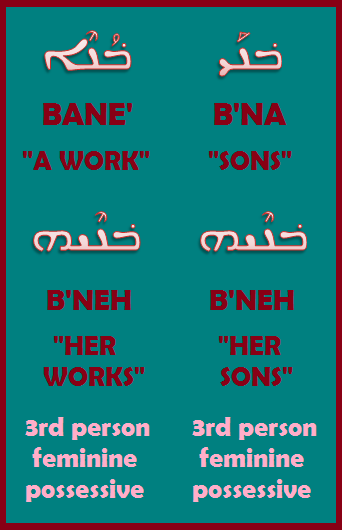 The reading in Luke 7:35 is the Aramaic word B’NEH, and should be understood as “her works / constructs,” since it explains how the variant reading in the Greek arose of the alternate meaning of “children / sons.”  Some scribe responsible for translating Luke’s Aramaic text into Greek made a mistake along the way, and rendered the term incorrectly as “children,” when it should have been “works.”  The singular Aramaic reading of AWEDAH in Matthew 11:19 is rightly also “works,” for the Aramaic term found there can only mean that one idea.  Apparently, with the proper meaning of Luke’s parallel passage in view, and the singular meaning of Matthew’s Aramaic term, the variant reading found there in the Greek text can be accounted for by another scribe attempting to correct the Greek reading of ERGON “works” instead to be TEKNON “children,” based off the Greek misunderstanding of Luke 7:35!  It is a confusing situation that exists in the Greek, but a completely harmonious reading if returned to the Aramaic.

The proper understanding of the verse is verified by the underlying factor that wisdom has works, according to Scripture, and is never said to have children.  With that underlying truth at play, it allows us to see that the Aramaic text’s reading harmonizes the two accounts and explains how the Greek texts very sincerely, but very disastrously brought about a confusing error into the Messianic accounts.  No contradiction exists, no difference remains between the two books at this instance.  The Word proves itself to be reliable and a faithful witness to what Messiah said, and that Messiah said it based off the Hebrew Scriptures, at that!  It also shows us that when doubts arise regarding matters like these, a return to the original texts will greatly aid us in an answer that upholds the inspiration of the text of the Word.

Wisdom indeed has works, and what works they show themselves to be!
All study contents Copyright Jeremy Chance Springfield, except for graphics and images, which are Copyright their respective creators.