This study is brief, but rather involved, so please stay with me and I think you will appreciate the amazing gem in this story displayed stunningly in the Aramaic Peshitta text of the New Testament:

THE SETTING:
The story of the Messiah healing the paralytic man in Matthew 9:1-7

THE PLAYERS:
Messiah, the paralytic man, and the scribes

OVERVIEW:
A paralytic man is brought to Messiah by his friends to be healed. Messiah at first says, “Your sins are forgiven you.” The scribes think to themselves “Blasphemy!” at this act of forgiveness, believing only the Holy One Himself can do such a thing.  Messiah asks why they think evil in their hearts, and then poses them a question with two options: What is easier?

Then, to prove that He has authority to forgive sins, He heals the man and tells him to stand up and walk!

To answer the silent charge of blasphemy in the hearts of the scribes, the Messiah asks them what is “easier” to say. The word "easier" in the Aramaic is P'SHEEQ and has the meaning of “make plain / translate.” This is important because He is dealing with scribes, whose job it is to read the Word and interpret it / translate, making it plain and simple for the people to understand, if help is needed.

With that as His preface, He then offers two options for them to decide which is “easier” to say, which I have included here in the Aramaic text, with transliteration and translation, because it is important to see the actual words He used: 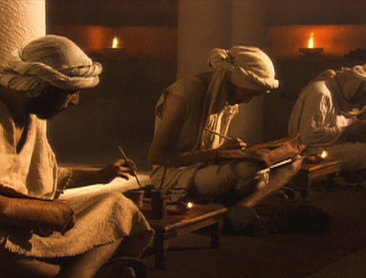 Technically, the answer is quite obvious: it is easier to say “Stand! Walk!” / QUM H'LAK in Aramaic rather than “Your sins are forgiven you!” / SHAWEEQEEN LAK KH'TAHAK. The first option spoken by Messiah has 3 Aramaic words, while the second option in Aramaic has 2 words.

Remember also that Messiah is talking to scribes here – the very name of these fellas actually means “counters” in Aramaic and Hebrew. That’s a major facet of what they did – count the letters and strive for constancy in copying, in order to honor the Word and prevent error from creeping into the text.  Unfortunately, they themselves were in error at this point, not understanding that Yeshua's authority included the forgiveness of sins - a fact which the very Word they counted and copied makes clear.

The reality of saying “Your sins are forgiven you!” carries with it a divine-right that no man possesses on his own, so that anyone can just “say it” without true authority, while telling someone to “Stand! Walk!” implies that you actually have that power to give them mobility. So basically, on one hand, it is technically easier to say the second option, while physically harder to make it happen.

So, Messiah implies it is easier to “say” the second option, while everyone, including the scribes, knows it is harder to "do" it. He then proceeds to say the easiest and perform the hardest, by saying to the paralytic: "Stand! Take up your bed and go to your house!"
He shows that He can make the paralytic to walk, choosing the easy thing to say technically, yet the harder thing to actually do, meaning the harder thing to say is obviously easy for Him to do! If He can make the lame to walk, then He can forgive the sin!

And ironically, to those scribes keeping count, He uses 5 Aramaic words to make this happen, as the above graphic clearly displays: which happens to be the combined amount of words in both of the initial options He gave!  He works this situation so absolutely brilliantly, healing a man in need of physical and spiritual restoration, and simultaneously handing it to the scribes who got played hard here.  He showed them unequivocally that He had the right to say whatever He wanted, because He had the divine authority to back it up with righteous action!