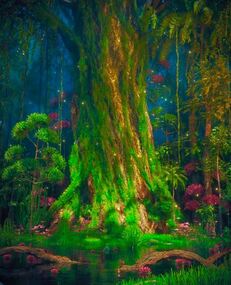 Since the beginning of time man has experienced an intriguing relationship with trees.
​
​They grow up around us and provide so much for our lives. Beauty, shade, building materials, food, clothing, oxygen, and the list goes on and on. Without trees man would be in a seriously unfortunate situation.

The Word itself portrays this unique relationship between man and trees in all kinds of situations. They play a role in many accounts recorded for us across the spectrum of Scripture. In fact, in several of these instances, key events in the history and future of mankind take place under the branches of a tree. Taking a brief look at some of the more prominent examples allows us to see just how integral trees are to the human experience. We will see them in central positions of important moments in the history of mankind, and from this, we can see that the plan of the Holy One for His image-bearers is consistent and will be fulfilled.
​
The first example, and probably the most recognizable of the trees in Scripture are the ones planted in the middle of the Garden of Eden. Genesis 2:9 speaks of the two trees. 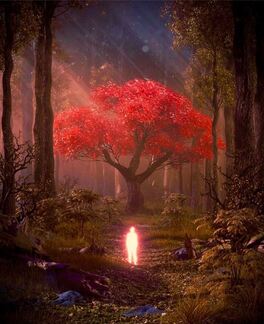 In this simple statement of the work of the Holy One, Scripture combines the two central destinies of mankind: the tree whose fruit can bring eternal life to mankind, and the tree whose fruit would bring death and destruction.
​
Everyone knows how the story goes: rather than partake of the fruit of the tree that would lead to eternal bliss in the Presence of the Creator, mankind instead opted for the tree whose fruit was rightly forbidden. That choice shattered creation into generations of splintered lives. All of man’s woes experienced throughout history drip with the nectar from that selfish bite. Under the trees of Eden’s Garden man fell from his high calling into a pit of vanity.
​
Thankfully, though, the Holy One did not abandon us to the consequences of our forebear's arboreal rebellion. Thankfully, He instigated a restoration to raise us up from that descent and set us again in proper standing with His Presence. This has taken the form of a long and seemingly meandering plan of redemption. That plan was kick-started in the person of Abraham, or as he was originally known – Abram. A simple pagan heart was somehow filled with adoration for the Creator of heaven and earth alone, and a relationship with the Holy One began in his life that would end up transforming all of mankind – the effects of which are felt even to this day.
​
And it all began when Abraham journeyed to the land of Israel and arrived at a very special place. Genesis 12:6-7 speaks of his destination.

6  And Avram passed into the land, until the place of Shekhem, until [the] oak tree of Moreh. And the Kena’ani was then in the land.
7  And YHWH appeared to Avram, and said, “To your seed I shall give this land.” And he built there an altar to YHWH, who appeared to him. 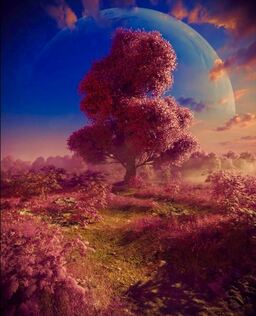 This is the first time Abraham built an altar in worship to the Holy One. It occurred under the branches of a special tree. Some English translations might read “plain” instead of “oak tree,” which is an error. The Hebrew term Eilon truly signifies an “oak tree.”

Beneath the oak tree of Moreh Abraham entered into a covenant with the Creator of heaven and earth. By initiating true worship, he was reinstating man with a proper relationship to the Most High. Under that tree man began his long journey back into the originally intended purpose given to Adam in the Garden of Eden.

Additionally, it should be noted that this tree is here referred to as the “oak tree of Moreh.” The Hebrew term Moreh literally means “Instructor / Teacher,” and is from the same root of YARAH from whence comes the word Torah – the “Instruction / Teaching” – the Law of the Deity. For man to be realigned to the role originally intended for him in the plan of the Creator, he would need to undergo the reception of righteous instruction. Abraham’s life and the lives of his descendants would experience the progressive revelation of that instruction, until it would finally materialize in the form of the Torah as we know it today. The importance of this tree is one that is not widely recognized, but is a tree that the people of Israel return to for several generations after this initial enacting of restored worship in the earth. The interested reader is encouraged to link the following passages with what happened originally at the tree of Moreh: Genesis 35:2-4, and Joshua 24:23-27.
​
Another key event which occurred under a most unlikely tree was what happened to a pagan Gentile at the foot of a cross while he oversaw the execution of one of Abraham’s descendants. The event is recorded for us in the Gospel of John 19:32-35. 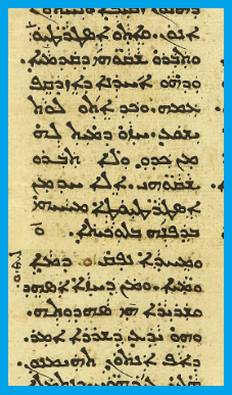 32  And the soldiers, they came, and they broke the shin-bones of the first, and those of the other who was hung up with him.

33  And when they came unto Yeshua, they saw that He was already dead, and they did not break His shin-bones.
​
34  Instead, one from the soldiers struck at His side with the spear, and immediately there came out blood and water.

35  And he who saw has testified, and his testimony is true, and he knows that he speaks the truth that you also should believe. 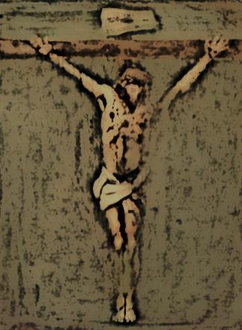 The breaking of the bones of the leg removed the skeletal strength allowing the crucified individual the ability to lift themselves up from their hanging position on the wood of the cross. This act of pushing themselves up would temporarily relieve the pressure upon their lungs forced upon them by the effects of positional asphyxiation, which would otherwise make their lungs fill with water due to not being able to properly process the air they were inhaling so as to exhale properly. This exhausted position ultimately led to drowning in one’s own lungs. The breaking of the legs of those crucified would hasten the process of positional asphyxiation that would normally take hours or even days and reduce it to the span of a mere agonizing few minutes.

The Roman soldier who approached the cross to break Yeshua’s legs was surprised to find Him already expired. Knowing the mechanics of the cross were fine-tuned to preserve a life for as long as possible in order to evoke as much suffering for the crucified as could be elicited, the soldier found the reality of Yeshua’s premature death to be unsettlingly perplexing. The spear was employed to puncture the side of the condemned rabbi in order to satisfy the soldier’s nagging suspicion of what had just happened. Upon seeing blood and water pour from the puncture wound of the spear, the reality of the situation hit the soldier as he stood under the shadow of Golgotha’s tree: Yeshua, with physical ability to raise himself up to gulp another breath still fully intact, had instead commanded his body and his mind to deny all the screaming synapses that begged for such relief, and in that state of utter control over body and soul, had allowed the consequences of extended positional asphyxiation to take His life. As the blood and water from his lungs dripped down the shaft of the Roman spear under the shadow of the wood, the soldier realized the impossible had occurred: this rabbi had done something he had never seen before with a heart calling for forgiveness for all responsible for his crucifixion.

The plan of restoration that had begun under the tree of Moreh in order to correct the sin that was so boldly performed under Eden’s trees was – here upon the ghastliest tree of all – even more boldly performed.
​
This event witnessed by a Gentile who had no previous affiliation or affinity with the children of Abraham opened up to the entire world the opportunity to be blessed by taking part of the true worship his people enjoyed. Paul, writing to an assembly of Abraham’s people who are worshiping along with Gentiles who have attached themselves to the Creator, spoke of this union in Romans 11:16-18. 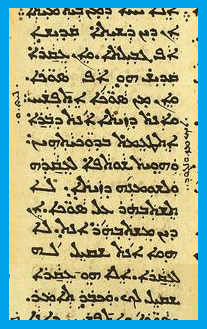 17  and if from the branches [some] were torn off, and you, you who are an olive tree of the wilderness, were grafted into their place, and became a partaker of the root and of the fatness of the olives,
​
18  you should not boast over the branches; yet if you boast, it is not you who has borne up the root, but instead, the root has borne up you! 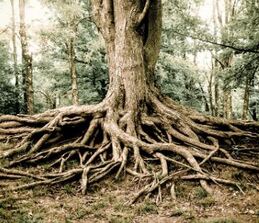 All Gentile believers in the Holy One have come into the faith through the process of spiritual grafting. It is by His goodness as expressed through the opening made by Yeshua that outsiders come under the branches of the “olive tree” of His people. Those with the same faith as Abraham are made partakers of the root of true worship when renouncing the wild ways of idolatry, and can then assume a place among the branches. Within that context of His spiritual tree, we all have access to the blessing and purpose for which man was originally created. In the shade of other faithful ones who have branched out and extended themselves into the world, we can grow and produce similar fruit, knowing that He has reintegrated all peoples into the plan of the Most High that was originally enacted with Abraham so long ago under another tree.
​
This plan of redemption and restoration is still underway. We are growing and bearing fruit in our position as His tree, but there will come a time when all the world is in a state of restoration, and the nations will benefit from His goodness in vital ways. The story of man’s relationship with trees concludes – at least for as much as we yet know – in the words of John in the book of Revelation 22:2, where he speaks of seeing something familiar in his vision of the New Jerusalem. 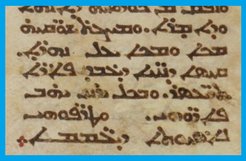 ​And in the middle of its street, on this side and on that of it, near the river, was the tree of life that made twelve fruits, and in every month gives [those] fruits and its leaves for the healing of the peoples. 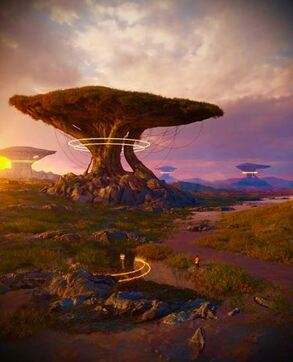 His plan to restore all things will come to fulfillment.
​
His will shall be done.

Man’s perfect purpose was to dwell under the trees of Eden’s Garden, eating of the tree of life forever in His Presence. Adam's rebellion effectively removed us from that goal. However, this purpose must still be realized. It cannot be thwarted even by the rebellion of man. The Creator's will must be carried out, and He has seen to it that it happens.

​The roots of that original desire have run through the millennia and will one day find new ground in the world restored, ready to sprout and flourish in fulfillment of that original grand desire for His world.

Although man caused all the sin and sorrow we experience in this world, the Creator enacted His plan to make it all right again. In His mysterious ways, He did so throughout the generations repeatedly in the presence of a tree to show us that our initial divine purpose was not forgotten or even abandoned.

Under the tree we were made to flourish.

​Under the tree we will live forever performing His will in His creation.
​All study contents Copyright Jeremy Chance Springfield, except for graphics and images, which are Copyright their respective creators.