THE FIRST AND THE LAST


​
The spiritual authority of Yeshua is of the utmost rank for His followers.

His teachings are the final word on Scriptural matters.

Nothing supersedes the weight of His instructions to all who accept Him as the leader of the Holy One’s Kingdom. Chosen by the unfathomable wisdom of the Most High, Yeshua in His role as the Messiah carries all the prestige necessary to administer the mind of the Spirit into men and women of flesh.
His interpretation is the first explanation a believer should seek as well as the final word on any lingering matter of doubt. All Israel can rest assured that the Messianic authority holds the merit of proper and righteous explanation of things spiritual, so once the Messiah is identified by the spiritual insight of an individual, His views possess both rank and acuity to provide the necessary answers that may not always be so clear elsewhere in the Word.

This study will show in brief this reality through a unique linguistic aspect of the Aramaic language, serving to show how the truth of Messianic supremacy for the follower of the Most High is embedded in the very script itself.
​
To begin, look now at Mark 9:33-35, where the context concerns the disciples and their teacher, and a lesson He shares with them concerning their placement in connection to Himself.
Upon reaching Capernaum, Yeshua addresses His disciples over an apparently heated discussion in which they were involved during their journey. In an episode exemplifying their spiritual immaturity, they argued over who among them was of a higher spiritual level. In verse 34, the text records that they specifically contended over who among them was “great.” In the Aramaic of the Peshitta text that underlies the translation I have provided above, the word I have rendered as “great” is the term RAV. It is a commonly encountered term in Jewish religious texts and is bestowed as a title upon a person of spiritual learning and practice out of respect for what they have achieved in their journey of faith. 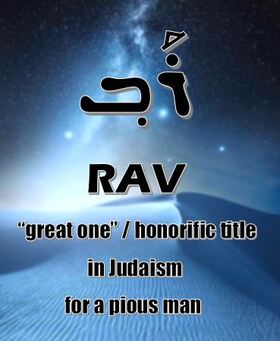 Yeshua’s response to this dispute is to set their roles in proper context. Spiritual greatness is not to be found with the accolades of others lavished upon a person, but when a person humbles himself to serve as the least of every man without recognition. It is in the self-abasement of souls that the Messianic community will properly flourish, for its supreme example is the Messiah Himself, who accepted the humility of shame and contempt by the religious elite who should have otherwise lauded Him onto the throne of His father, David, but instead cheered Him onto the disgraceful wood of the cross as a criminal worthy of death.
This notion is repeated in similar word in Matthew 20:25-27, where Yeshua then states in verse 28 the purpose of His coming as being willing to be the least of all.
Yeshua’s Messianic title of “Son of Man” displays the selfless concept extremely well when understood in its Semitic sense. The Jewish text of Vayikra Rabbah 2:8 explains the spiritual meaning behind calling someone a "Son of Man" beyond its normal referent as just a “generic individual.” 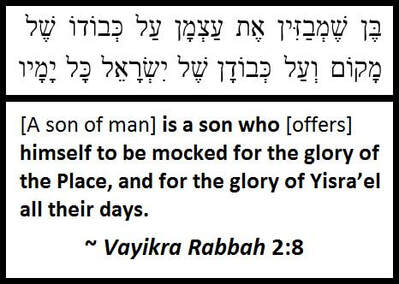 The religious concept of a "Son of Man" is not only Messianic in nature, but decidedly self-sacrificial, aligning with the way in which Yeshua uses the title!

​Additionally, in this text the Hebrew term MAKOM “Place” is a commonly encountered title for the Holy One in Jewish religious texts, who is viewed as the “Place” of the world, in that we are all part of His creation and thus inevitably attached to Him. The Messianic role of the “Son of Man,” therefore, is one where He accepts and endures shame and debasement for the end purpose of exalting the Creator and His people. 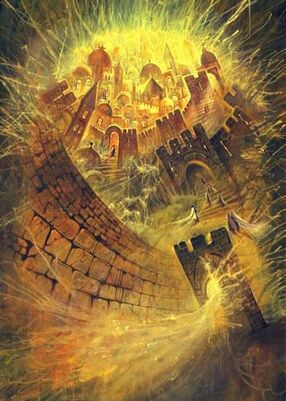 The example of Yeshua as recorded in the New Testament is absolutely that of self-abasement. The disciple must follow the lead of the example of Messiah.
​
This is most clearly explained in John 13:34.
This “new” commandment is actually just a magnification of the Torah’s commandment already incumbent upon the disciples, as found in Leviticus 19:18.
The magnification of what this truly means is that the disciple must love his neighbor with the same selfless, un-entitled love which Yeshua showed His own students—and even those who were against Him. This is an example of the masterful Torah exegesis of the Messiah mentioned above in this study. He alone of all Scriptural teachers has the end-all interpretation. While others certainly possess insight and divine revelation on spiritual matters, His status as the long-awaited Messiah means His perspectives on the Word are above and beyond all others we might encounter. 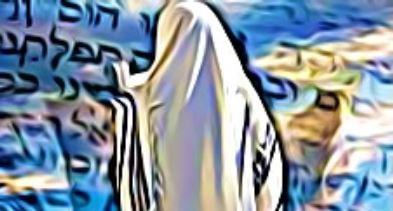 This reality is probably best shown in Matthew 23:8-11, where Yeshua admonishes His students with cautionary words concerning the temptation of erroneous exaltation so often found in religious circles.
In words that are astonishingly misunderstood and subsequently misapplied, Yeshua provides an important guideline for His followers: none are to be called “Rabbi” or “Father.” This prohibition requires clarification of what it actually entails. While the overwhelming majority of interpretations suggest that these are titles to be rejected, in reality, the warning centers on His disciples not attempting to be the sole source of spiritual authority or even moving on to teachers other than Himself as their final source for Scriptural insight.
He has provided in Himself the correct path of authority: by being inherently the first among all spiritual teachers, He yet allowed Himself to be viewed as the last of them all—a position of denigration and seeming un-importance. Yet, for all who come to Him, Yeshua is seen in His proper context: the first and the last source of divine revelation for mankind.
​
In this is seen the significance of His statement as recorded in Revelation 22:13.
This claim is important for several reasons. While it is most often presented in its Greek-based form of “the Alpha and the Omega,” the Semitic version as taken from the ancient Aramaic of the Crawford Codex reads slightly differently, but in a significant manner. His assertion of “I am the Alaf, and I am the Taw” is the Aramaic way of saying the more familiar Hebrew letters of Alef and Tav. 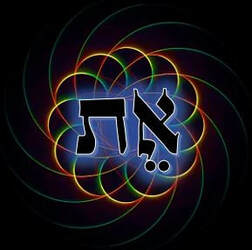 The Alef and the Tav are the first and the last letters of the Hebrew and Aramaic alphabets, respectively. The pairing of the two letters Alef-Tav is also of note in that it is a grammatical term in the Hebrew language appearing thousands of times in the Word, yet often untranslatable into English. The statement from Revelation 22:13 above is popularly applied to the appearance of that word in the Hebrew text of Scripture, and in that context, is said to possess a Messianic meaning.

While a case could be made under certain circumstances that the pairing of Alef-Tav can hold Messianic significance, the reality is that on a more technical level, the passage from Revelation 22:13 points to the Messiah in a different manner.

This alternate way of appreciating what is recorded of Yeshua saying “I am the Alaf, and I am the Taw,” comes by looking at the statement in the context of the example He gave of the first being last—a reversing of order—and connecting it to the Aramaic tongue in which He spoke those words. Aramaic script, although using the exact same alphabet as Hebrew, is unique in that some of its letters undergo a merging when they are written consecutively. For example, when one writes the letter Taw and then writes the letter Alaf, the two letters can be joined to form a ligature. This is not a feature of the Hebrew language script, and occurs in various Aramaic scripts called Estrangela, where the letters are written in a more cursive style that allows for connection between them. This script form is attested to in inscriptions over 2,000 years old.
​
The accompanying image shows how the normally separate letters of Taw and Alaf can merge to form the interconnected ligature. Like Hebrew, Aramaic is read right-to-left, so the Taw is on the right and the Alaf is on the left, for reference.

This union of Taw and Alaf is important because it showcases in visual form the statement of Yeshua in Revelation 22:13 when He says He is the “Alaf … and the Taw.” He is not just the Alaf-Taw / Alef-Tav in a symbolic form, but both—a union of the two. He is the first and the last in one!

The significance of this detail is that it is only found in the Aramaic script. It cannot be presented like this in Hebrew. Only in the script of the tongue of Aramaic—the language of the Messiah and His first-century followers—does this feature exist and give insight to the claim in Revelation 22:13.
​
Additionally, as stated previously in this study, Messiah is the final word on all spiritual matters—from beginning to end, first to last. This union, therefore, can be further appreciated by looking at the Aramaic term for “Word,” which appears several times in John 1:1. It is the term MELTHA, and typically is written as follows.

While this is one form of how it can be presented, using the above allowance of uniting the Taw with the Alaf, the term MELTHA “the Word” can also be written alternatively, as follows. 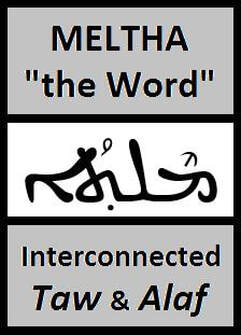 One can see this merging of the Taw and Alaf also in other forms of the Estrangela script when writing the term MELTHA. 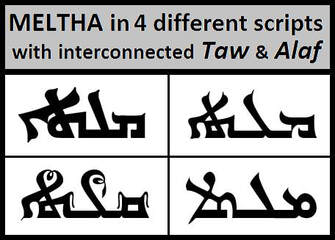 Is it a coincidence that the merging of the two letters also seems to visually create the form of a cross? One can only wonder, but it is intriguing to consider. Nevertheless, the ligature of the Taw and Alaf highlight the central nature of Yeshua’s Messianic role as the first and the last, the greatest and the least, whose spiritual authority encompasses all of the merit made possible by the Torah, so that He can rightly rule His people and all who come to the Creator with divine discernment by upholding the Word in its most in-depth, richest sense.
​
One final insight comes forth from these details. The pairing of the letters Taw and Alaf themselves create two different terms in the Hebrew and Aramaic languages that both bear upon this study. This word as the Hebrew term TA appears only a few times, and there has the meaning of a generic “place” of some kind—a room or chamber (usually in the Temple). 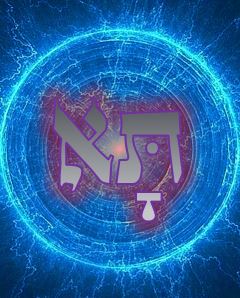 In this usage it parallels the idea presented previously in the quote from Vayikra Rabbah 2:8, where it mentioned the Son of Man who selflessly allows himself to be mocked for the glory of “the Place”—a reference to the Creator! The link is amazing!
​
This word as the Aramaic term TA is the imperative tense of the word “come.” 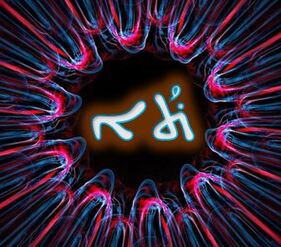 In this form it is found in Talmudic and Rabbinic texts, but it is also found in an interesting passage from the Aramaic Crawford Codex of Revelation 22:17, providing a fitting close to this study.
Both instances of the command “You must come!” here are the Aramaic TA! Thus, immediately after Yeshua tells us He is the Alaf and the Taw, the divine message to Taw-Alaf is twice presented to mankind. 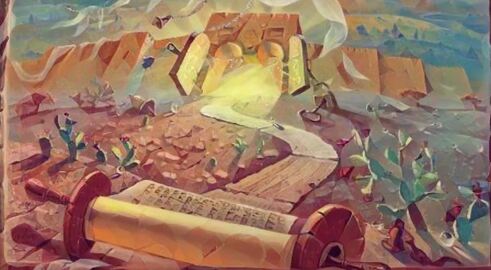 At the end of all things the cry to align with the Messianic vision of the Most High still goes forth. All who seek His truths have the invitation to come and learn from the Messiah the depths of righteousness found in the Creator’s Word. If man humbles himself and lets the work of the Spirit transform his heart and mind, he will be fit to sit at the feet of Yeshua, the First and the Last, the supreme human authority of the Torah.
​
​All study contents Copyright Jeremy Chance Springfield, except for graphics and images, which are Copyright their respective creators.