​
This study is also available in audio.
The ten plagues wrought upon Egypt were a sign that nobody can control the Creator of heaven and earth. He is master of all that He has made. Furthermore, the plagues He poured out upon the land of the Pharaohs were not arbitrary. Rather, the nature of each plague was divinely ordained to destroy the idolatrous faith of the Egyptian peoples. Their long mockery of the faith of their Israelite slaves would at last be judged by the hand of heaven.
This reality was at last explained to Moses by the Holy One Himself, as recorded in Exodus 12:12.
At the pinnacle of the plagues, the Creator revealed the truth behind the overpowering acts of divine design that had laid waste to the land of Egypt. These plagues ripped apart the pantheon of gods in which the Egyptians had so wrongly placed their faith, tearing through the land of the Pharaohs and uprooting any seeds of trust that might linger in the spiritually rotten ground. Each plague set an Egyptian idol in its sights, and the resulting havoc brought the worshippers of that particular deity to their knees in knowing the spirits they had followed could not withstand the might of the Deity of the Hebrews who had apparently walked in and made a mockery of everything Egypt had so arrogantly paraded as superior. 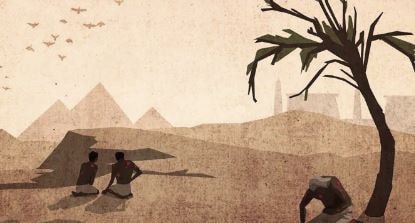 Placing their faith in the failures of the Egyptian pantheon showed the sinful people that they had done this to themselves. The staunch refusal of Pharaoh to let the people go for only a brief period of worship shed Egyptian blood from the brazen crown to the trembling feet of the nation. They had nobody to blame but themselves for the staggering defeat they experienced at the hand of Moses.
​
This truth is perhaps most amazingly seen in the second of the ten plagues. In Exodus 8:1-5, we read of the initial threat and its consequences.
3  And the river shall spawn frogs, and they shall ascend, and they shall enter into your house, and into the chamber of your bed, and upon your couch, and into the house of your servants, and into your people, and into your ovens, and into your leavening-vessels.

4  And on you, and on your people, and on all your servants shall the frogs ascend.”’”
​
5  And YHWH said to Mosheh: “You must speak to Aharon: ‘You must stretch out your hand with your staff, over the streams, over the rivers, and over the ponds, and make ascend the frogs over [the] land of Mitzrayim.’”
This plague of an over-running of frogs was a direct attack against the Egyptian goddess named Heket (also sometimes referred to as Heqet / Hegt). Heket was depicted anthropomorphically with the head of a frog. She was associated with the yearly flooding of the Nile river that was vital for the irrigation of crops, and in that context, with the notion of fertility and birth. She was also portrayed in statuettes of frogs that her worshipers would keep in their chambers for the hope of children and protection during childbirth.
The divine threat that frogs would overrun the land and come upon and into everything was a challenge to the goddess that she would not be able to protect anyone, but that she would instead allow all to be endangered by the very creature which represented her to the faithful of Egypt. What is essentially depicted is a tidal wave of frogs overflowing across the land instead of the waters of the Nile.
​
What is interesting, however, is the wording that is used once the plague actually occurs, as recorded in Exodus 8:6.
In the four instances before this where the term “frog” is used in the threat of the plague, the term is always distinctly in the plural form: BATZFARDE’IM / TZFARDE’IM / HATZFARDE’IM “with frogs,” / “frogs” / “the frogs.”

In this instance in 8:6, however, the Hebrew term is HATZFARDEYA “the frog.”

The Hebrew text is quite clear on the intent: one single frog is said to have ascended from the Nile river. If this were all it stated, no room for questioning would exist, but the text continues and tells us that this single frog “covered the land of Mitzrayim.” What is that supposed to mean? Precisely what this intended is not absolutely clear, unfortunately, but we can yet infer some meaningful details from the text.
​
According to Judaism, the plague of frogs and its unusual usage of the term “the frog” is the subject of a debate that was left undecided for millennia, as the following two quotes from the Talmud show.

The discussion continues there and another opinion is offered.

As odd as it may be, Scripture elsewhere confirms the Torah’s concept of a single frog, as found in Psalm 78:45.
Not only does this bolster the concept of one single frog appearing as the text clearly says, the conjugation of the last term in the verse—VATASHCHITEYM “and it ruined them”—is more literally rendered “and she ruined them,” with its verbal root being in the singular feminine. This would align with the Talmudic assertion that this frog indeed spawned more frogs—it was due to her spawning of more that they were “ruined.” Additionally, it would align with the prophetic warning of Exodus 8:3 that “the river” would spawn frogs. One frog rising from the river and then spawning more would fulfill that condition.

To add to the already intriguing aspect of the Torah’s text is that another passage from the book of Psalms asserts a slightly different detail worth discussing. Psalm 105:30 alters the information that was given concerning “the frog” that came up from the river.
This provides new information—that the land itself spawned frogs. The prophetic warning initially indicated the river would do so, and the text of Exodus 8:6 confirms that happened through “the frog” that arose from the river. This verse, however, asserts that “their land” brought forth “frogs”—once more returning to the plural form of the word. The notion that “their land” is where the frogs came from and not the water also makes sense with the detail in the verse quoted above that the spawning also occurred “in the chambers” themselves, and not merely in the waters, where the original frog arose. 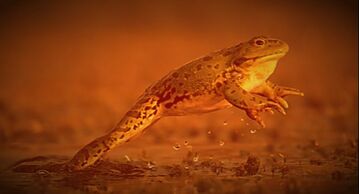 This is where the nature of the situation changes. Rather than being just a single frog from whence came other frogs, Exodus 8:7 portrays the developing scene by introducing the Egyptian magicians whose involvement negatively impacts their own people.
The sorcerers, devoted to the stygian spirits of the Egyptian cult—among whom was certainly the frog-depicted goddess Heket—used their unclean methods to mimic the miracle of Moses and Aaron, but the result was not the same! Rather than a single frog rising from the river, the text tells us that the use of their dark arts was responsible for “the frogs” that came upon the land.
​
Additionally, while Exodus 8:6 includes the detail that "the frog" came from the waters when Aaron brought the plague, no such water source is mentioned in 8:7 when the sorcerers perform their arcane acts. This leaves the reader to assume that it was their use of magical manipulation of the elements that brought forth the multitude of frogs from the land itself, and not the river specifically. This subtle detail would therefore fulfill the nuanced information preserved in Psalm 105:30—resolving any potentially assumed contradiction. 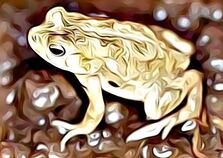 The consequence of the Egyptian magicians attempting to replicate a divine miracle appears to be the main source of the actual plague. This can be surmised due to the fact that it is only after they create a disastrous addition to the frog(s) brought about by Aaron that Pharaoh is recorded to have sought relief, as seen in Exodus 8:8-14.
8  And then Far’oh called to Mosheh, and to Aharon, and said, “You must pray to YHWH, and He shall remove the frogs from me, and from my people—and I shall send forth the people, and they shall sacrifice to YHWH.”
​
9  And Mosheh said to Far’oh, “Such glory shall be over me: when shall I pray for you, and for your servants, and for your people, to cut off the frogs from you and from your houses, to only remain in the river?”
12  And Mosheh and Aharon went forth from being with Far’oh. And Mosheh called out to YHWH concerning [the] matter of the frogs, which He had appointed for Far’oh.

13  And YHWH did according [to the] word of Mosheh, and the frogs died from the houses, from the courtyards, and from the fields.
​
14  And they piled them—heaps [upon] heaps—and the land was odorous.
Their devotion to Heket and her frog-like image caused the sorcerers to attempt to out-do the miracle performed by Aaron at the command of Moses. Had they not been committed to the cult of Egyptian deities this plague of frogs would likely have not been so incredibly severe as to have Pharaoh admit defeat by requesting Moses himself to pray for relief from the oppressive presence of the leaping and croaking harbingers of judgment.
The divine declaration that judgment would be poured out upon the Egyptian deities all stemmed from the pride that burned in the Pharaoh’s unrelenting heart. Refusing to cede any power from his pantheon to the Deity of the Hebrews by letting the people free for just a small sabbatical to worship Him as He requested, Pharaoh set into motion events that would ensure they would not have that opportunity, but that they would subsequently do so in a way that destroyed any trust in the idols he had wrongly committed himself to following.
The plague of frogs was used to display this reality to everyone in Egypt: the Egyptian deities would be crushed under the authority and power of the Creator of heaven and earth. No dark deity revered in the land of the Pharaohs would be able to resist the might of the Mighty One of Israel. A creature as simple and insignificant as the frog was used to emphasize the reality of that Divine judgment.
​
​All study contents Copyright Jeremy Chance Springfield, except for graphics and images, which are Copyright their respective creators.