WHAT THE SHOFAR SAYS


​
The fall festivals recorded in Scripture begin with the celebration called Yom Teruah (The Day of Trumpets), and is also known in Judaism as Rosh Hashanah (Beginning of the Year – according to the reckoning of the civil count involving debts, coronation of kings, etc.). The day is significant also in a prophetic manner due to its link to the inauguration of the coming Messiah. For this reason, believers participate in the day with great expectations in their hearts!

The command which is given to use regarding how to observe Yom Teruah is found in the Torah. The particulars are quite simple in execution. Unlike the many rules regarding Passover or Tabernacles, Yom Teruah has but a few details that must be seen to in order to fulfill the requirements of the day.
​
Leviticus 23:24-25 lay out the details for us.

Speak to the sons of Yisra'el, to say, ‘In the seventh month, on the first of the month, there shall be for you a rest, a memorial of teruah, a holy gathering. All work done shall not be performed, and you shall [make] an offering of fire to YHWH.’
This command is repeated in Numbers 29:1, along with the explanation of the offerings that are to be brought.

This is the entirety of the Biblical details we are given in order to fulfill observance of this day. We are told to cease working, bring offerings, and to listen to the sound of the shofar. There are aspects of these details that Judaism has developed over the millennia to unify the expression of the fulfillment, as shall be discussed below in the study, but this is the totality of the directives we are given for Yom Teruah.

For this study, I want to focus on the sounds of the shofar itself. In a previous study – VOICE OF THE SHOFAR – I presented the notion that the shofar is an instrument of speaking, and exactly what that idea meant for the believer. In this study, which could be viewed as a follow-up to the former concept presented therein, it will be addressed regarding what it is that the shofar is actually intending to tell us when it speaks.
​
In Psalm 89:16 (15 in English versions), the psalmist makes the following declaration.

​Blessed are the people knowing the teruah; YHWH, in the light of Your face they shall walk.
We are told it is a blessing just to even hear the sounds which the shofar makes. How can hearing the sound of a musical instrument bring about a spiritual blessing to a believer? That seems like an odd idea to suggest. To make sense of this strange assertion, it is necessary to address the sounds which are made by a shofar. While it is true that each shofar produces its own unique sound, since the contours and width determine so much of how the air being pushed through it will result in an audible sound, there are actually three (3) distinctly different types of sounds that the shofar is able to make.
​
Let us address these three sounds so we can appreciate what it is that shofar really says. 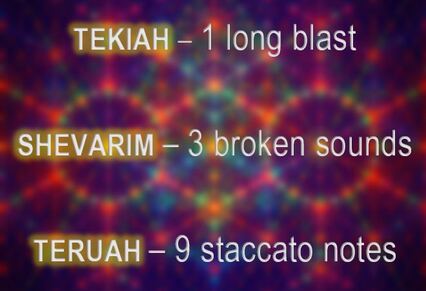 During a traditional Yom Teruah observance, these three types of sounds are combined in certain sets to create a very lengthy event that allows everyone to distinctly hear the sounds of the shofar and thus remember them as the Torah commands us to do. In fact, while there is a little bit of difference depending on what type of congregation you attend, the majority of the sets are the same, and are as follows. 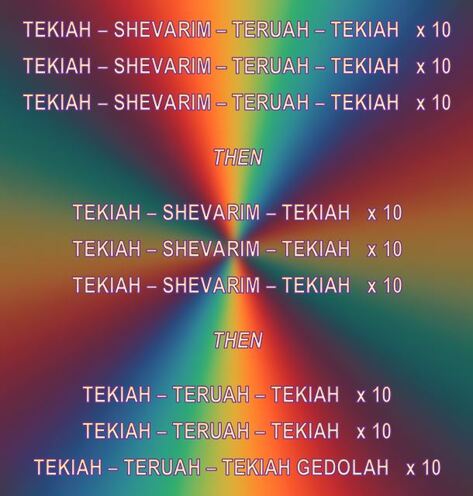 This lengthy repetitive blowing of the shofar is meant to engrain the sound into our hearts and minds so we do not forget. If you’ve ever experienced this, it is definitely an event you will remember!
​
Knowing now there are three types of the shofar’s sounds, let’s take a closer look at those three types, for they each have a meaning significant for us. 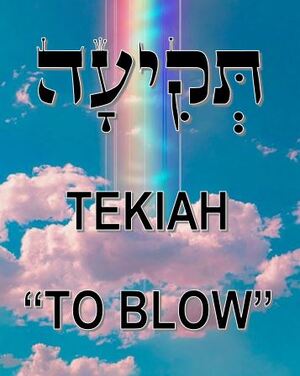 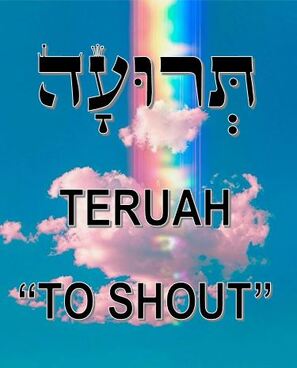 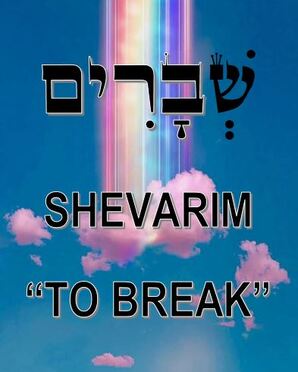 ​These definitions of the sounds of the shofar speak to each of us to examine ourselves, to be stricken over our sins and our failures, so that when Yom Kippur (The Day of Atonement) comes ten days afterward, we will be in the proper spirit before the Holy One.

​A passage in the context of hearing the sound of the shofar and letting it work a work of repentance in us is the following from Psalm 51:21 (17 in English versions).

​​​The sacrifices of the Deity are a spirit shattered; a heart shattered and crushed the Deity does not disdain.
These three types of the sound of the shofar are the basic understanding of the matter that speaks to being broken, but they possess in them each a deeper insight waiting for us to perceive and apply. The definitions of each of the three terms are multi-faceted and hold alternative meanings that are worth looking at for their application that helps us to see what they are really saying to us. Let us revisit now all three definitions and look at them from their alternative concepts to perceive what is held in each. 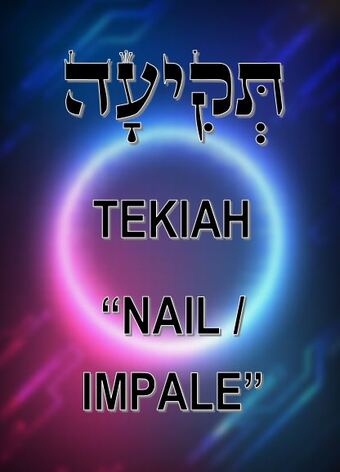 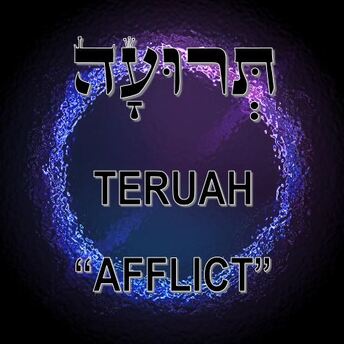 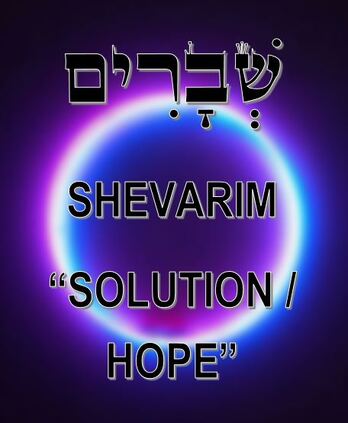 It is amazing to consider, but the alternative meanings of these three sounds speak to a transformative work that can happen to all who listen to the Spirit during the time when the shofar speaks on Yom Teruah.

Tekiah can mean “to nail / impale” a thing.

Teruah can mean “to afflict” something.

​We come on Yom Teruah as believers following the example of our Messiah Yeshua, who obeyed all the Torah applicable to Him, and in His righteousness won redemption and the right to be King of Israel.
​
This Messianic association with the shofar sounds can also be seen in the following verse from Numbers 23:21.

He has not beheld wickedness in Ya’aqov, and has not seen vexation in Yisra’el; YHWH his Deity is with him, and a shout of a King is in him.
When we hear the sounds of the shofar, we must think of the crucifixion that the Messiah underwent for His people, and we should be broken by our own sin, by what our sin cost, and yet, in the midst of all of that, we should likewise have a hope, for the solution to it all has been found in the Messiah. In His merit we find mercy before the Holy One in heaven.

I want to share one more detail of interest in knowing and appreciating what the shofar really says. As the prayers are being prayed in many synagogues around the world, and as the people of the Most High are listening to the combinations of the sounds of the shofar, many of those are encountering a prayer that is at once amazing and scandalous. The following prayer is amazing in that it even exists at all in a Jewish religious context, and it is scandalous in that it is, in modern times, sometimes presented in the prayer books in an unvocalized font, so that the reader knows not to actually pronounce any of it vocally, or it is sometimes omitted entirely, or, in the cases where it is left intact, if asked about specifically by a congregant, is liable to have that congregant removed from the synagogue altogether.

The volatility of the prayer’s contents is seen in this photo from an old Machzor I have had for years. The diminutive typeset is not the best, with ink blotting some of the letters into obscurity, but the intended message is clearly intact for all to read. 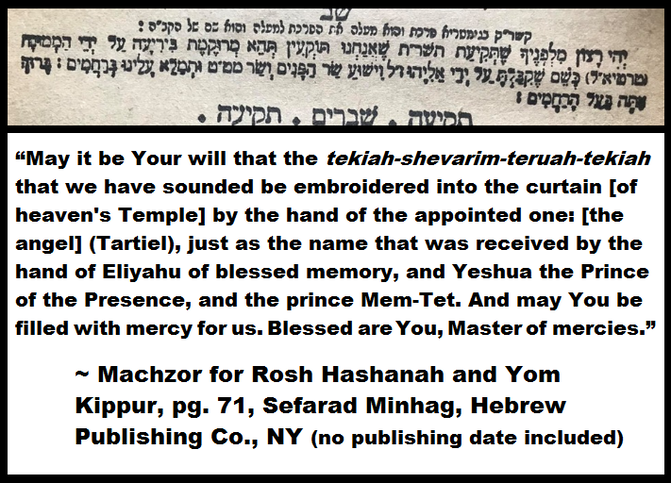 In almost unbelievable ink, the name Yeshua with the title “Prince of the Presence,” is lifted up for merit before the Holy One in this prayer. He is mentioned along with an angel named Tartiel, the prophet Elijah, and yet another angel called “Prince Mem-Tet,” which is an abbreviation for the angelic name of Metatron. How the name of Yeshua came to appear in the prayer book is a hotly debated topic and incredibly controversial, with no definitive answer to be had, and it is not the place here to address the nuances of why Yeshua would be included among such a grouping in a synagogue prayer during Yom Teruah, but the point is rather how incredible is the very inclusion of Yeshua’s name at all during the context of heavenly merit and intercession for the repentant!

For whatever reason it was originally included, it may well have been an act that will prove to be prophetic in due time, considering how the shofar is connected to Yeshua in an important way. This Messianic association with the shofar is seen in 1st Thessalonians 4:16 that could potentially be linked to this above prayer: 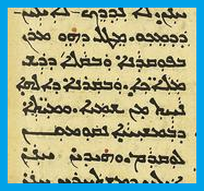 ​Because our Master Himself, with the commandments, and with the voice of the chief of the angels, and with the ram’s horn of the Deity, shall descend from the heavens, and the dead who are in Messiah shall rise first.
Given the Messianic coronation significance of the time of Yom Teruah, could it be that Yeshua returns during this very strange prayer uttered during the midst of the blowing of the shofars here on earth? Could it be that as His people are praying and this synagogue prayer that leans on the merit of Yeshua Sar Hapanim is being spoken, that the answer is given from the heavens, and the heavenly shofar speaks once more to herald the coming of Yeshua?

We shall wait to see how it all plays out.

​But until then, may we all be blessed to hear what the shofar says now, that we may be broken in our own repentance and have the hope of the Messiah to come!
​All study contents Copyright Jeremy Chance Springfield, except for graphics and images, which are Copyright their respective creators.