by Jeremy Chance Springfield
​3/14/2015
In the 3rd chapter of the book of Mark, Scripture lists the twelve disciples appointed by the Messiah who accompany Him in His ministry in Israel.  Among the names listed, Shemun (Simon) is given the name Kefa, or as most English translations render it – Cephas.  Shemun is then called Kefa in repeated instances throughout the Good News accounts.  A nickname is also given to the two brothers – Yaqub and Yukhanan (James and John), which is never used again after that one instance.  That nickname, as rendered in English versions of Mark, is BOANERGES.  The actual verse from Mark 3:17 reads as such in the KJV:

And James the son of Zebedee, and John the brother of James; and he surnamed them Boanerges, which is, The sons of thunder:

Again, this is the only time in the Word that the nickname is ever referenced for these two brothers.  It is found here and nowhere else.  There is a recorded instance elsewhere, however, that apparently elaborates on this nickname given to the brothers.  Found in Luke 9:51-56, the account concerns a trip Messiah was taking to Jerusalem that had Him travel through a town of the Samaritans, and caused these two brothers to seek to mimic a miracle performed by the prophet Elijah: 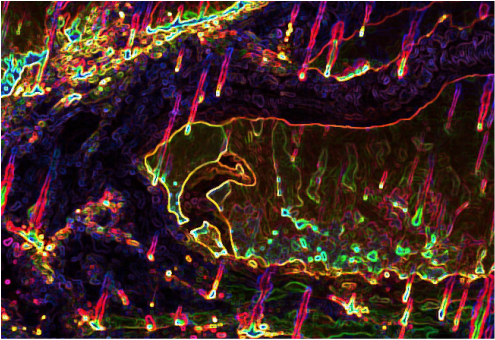 9:51  And it was that when the days of His ascension were fulfilled, he prepared His face to go to Urishlem.
9:52  And He sent messengers before His face, and they went, entering to a village of the Shamraye’, as to prepare for Him.
9:53  And they did not receive Him, on account that His face, to Urishlem, was set to go.
9:54  And Ya’qub and Yukhanan – His students – when they saw, they said to Him, “Our Master, do You desire that we speak, and bring down fire from the heavens, and end them, as that also EeliYa performed?”
9:55  And He turned, and reproved them, and said, “You do not know of what spirit you are,
9:56  for the Son of Man did not come to destroy souls, but instead, to make them live!”  And they went to another village.
This passage indicates the reason the brothers were given the nickname by Yeshua.  Whether He gave it to them before this event at the time of their initially being chosen to be disciples, or if it was given to them after this particular event and only recorded by Mark in his list as a reference to this astonishing event, either way, we can see they deserved the nickname.  Without the Spirit of Holiness inhabiting them, even with their best intentions, they were still not operating in the righteousness of the Holy One.  The title BOANERGES “Sons of Thunder” fits them rather well. 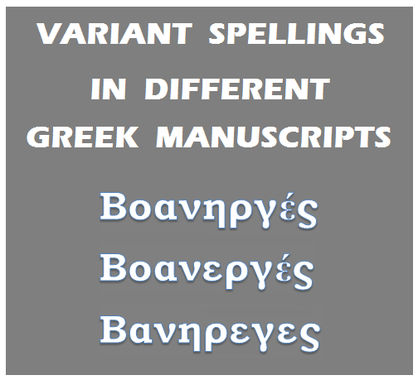 The precise identification of the nickname BOANERGES is something that has been debated and puzzled about among Bible enthusiasts for a very long time.  Part of the reason for this prolonged discussion among normally-cogent commentators is that not all Greek manuscripts agree in even how the term should be spelled, making the identification of the meaning somewhat difficult if approached from that language.  There are three different Greek spellings of the name BOANERGES, depending on which Greek manuscript one uses.

It has been highly doubted that it arises from the Greek, while some few propose a Latin meaning is possible.  The reality of the situation is that the nickname is really blatantly Aramaic in nature. While a Semitic source should not be surprising, given who gave the nickname, there is more to it than just identifying the source-language.  There have been those who would quickly assert a Semitic source for it, but have not gone further in exploring the details surrounding this particular issue.  Unfortunately, this is an instance where the scribes responsible for the Greek manuscripts made an unbelievably bad mistake in translating from the Aramaic text – a fact that clearly shows the Greek New Covenant writings originally arose from the Aramaic text!

The Greek manuscripts promote that BOANERGES (or a variant pronunciation) means “Sons of BRONTES” – that is, very specifically, “Sons of Thunder.”  But this is where the Greek begins to show itself in great need of correction!  In fact, this Greek statement of clarification that is preserved in every Greek New Covenant manuscript is actually not true!
Look now at the way the verse is read from the Aramaic, and we will see something interesting taking place.  The nickname given to Yaqub and Yukhanan is BENAY R’GESHI, which the text then tells us means BENAY RA’MA.  This statement from the Aramaic is explicitly true.  But why?  What is the difference?  How is the Greek statement false, but the Aramaic statement true? 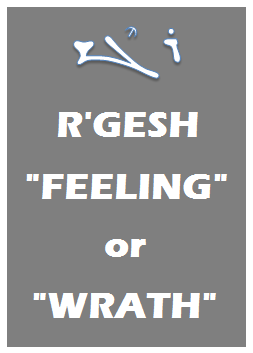 The Aramaic term used by Messiah is R’GESH / REGSHA.  It is a word that, like many Semitic terms, possesses more than one meaning.  In this case, depending on context and how the term is inflected in the text, the word can mean either “wrath” or “feeling / “knowing.”

R’GESH is used outside of this instance in the Gospels only one other time to refer to “wrath” (see Acts 4:25).  It is used to refer to “feeling / knowing” six other times in the New Covenant writings (see Mark 5:29; Acts 5:2 and 13:27; Hebrews 5:14 and 13:2; and 1st John 2:3). This shows the term's prevalent use was to reference the meaning that Yeshua did not intend, rather than the one He did intend, which explains exactly why Mark felt the need to give a clarification of what was actually meant by Yeshua.  Messiah was using the term in its more Hebraic manner, in which language the same term is also used, but there it is focused on the “anger” side, and does not possess the “feeling / knowing” alternate definition that is more popular in Aramaic. 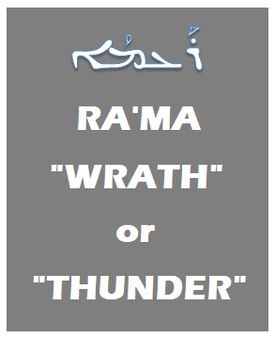 At this point in this study, the Greek is guilty of nothing but what is found in the limitations of its transliteration ability – a phonetic disadvantage that prevents it from rendering the Semitic pronunciations accurately.  At this point, BENAY R’GESHI does equal BOANERGES, if being a bit unwieldy. However, the situation gets worse for the Greek manuscripts, as is about to be shown.

With this factor in place, let us look now at the second term of RA’MA that Mark uses to elaborate on Messiah’s choice of R’GESH.  This term is also one that possesses a compound meaning in the Semitic world.  In some cases it is “Thunder,” while in others, it is “Wrath.”
The intent of Mark was to clarify the term Yeshua used, and when one considers that Yeshua’s term of choice was not meant as “thunder,” but as “wrath,” then the correct choice for how Mark intended the reader to understand RA’MA is clearly that of its particular definition of “wrath,” as well!  The Aramaic makes complete sense, but unfortunately, the Greek translators chose the wrong meaning of the Aramaic RA’MA, and has brought confusion to countless translators and readers of the Word.  It is ironic that the clarification intended by Mark concerning Messiah's words resulted in an unexpected obfuscation at the hand of the scribes! The scribes who translated the Aramaic into Greek made a mistake, yielding an error that has remained to this day in every Greek manuscript of the New Covenant.  Thankfully, the Aramaic text has preserved from 1st century times the original intent of Yeshua's choice for the nickname. Messiah’s purpose in giving the nickname was to speak to the unfounded anger of His two fledgling disciples, and had nothing to do with "thunder" at all.

Thus, the true rendering of the Aramaic text of Mark 3:17, and how the Greek should be corrected to read in light of it, would be something like this:

And to Yaqub, son of Zawdai, and to Yukhanan, the brother of Yaqub, he gave them the name ‘B’nay-R’geshi,’ that is, ‘Sons of Wrath.’

These two disciples had zeal for righteousness to be performed on those rejecting Messiah, yet they lacked the wisdom of the Spirit to know when compassion was necessary instead of judgment.  The nickname given to them is never repeated, because they would end up being changed by the power of His Spirit who would dwell in them eventually, and who would produce in them the wisdom to know the difference.  Without the Spirit, we live in all types and manifestations of sin.  Ephesians 2:3 explains it well:

...in those deeds we also walked in from before, in lusts of the flesh, and performing the desires of our flesh, and our mind, and as sons of wrath as fully as the rest.

This declaration by Paul about being "sons of wrath" actually speaks directly to the meaning of what Yeshua intended by the nickname given to the two disciples. This can be seen in that the phrase here of "sons of wrath" is the Aramaic B'NAYE D'RUGZA, where RUGZA is merely a phonetic variation of REGSHA, identical in meaning and in spelling, except for the interchange of the letters Zayin "z" and Shin "sh." Another example can be seen in such terms as KHAZAQ and KHASHAQ, identical in meaning "attach," and in spelling except for the variation of the Zayin / Shin. In fact, many Biblical Hebrew and Aramaic words that are viewed as synonyms are found to be, upon closer examination, merely phonetic variations of one another, cropping up over the centuries due to regional pronunciations. Thus, the use by Paul of this phrase is essentially the same expression Yeshua uttered to His two disciples! Paul tells us that such who are "sons of wrath" are walking in the flesh, and Yeshua admonished His disciples who were eager to destroy as not knowing what spirit they were in - obviously referring to being in the flesh and not the Holy Spirit. Therefore, the connection is easily solidified for us between these verses. We cannot be "sons of wrath," but must follow the Spirit in our allegiance to the Messiah.

The book of James goes on to address the matter further for us in 1:19-20, which reads:

And you, my beloved brothers, may every man of you be quick to hear, and slow to speak, and slow to being provoked, for the anger of a person does not perform the righteousness of the Deity.

We are not to be “sons of wrath,” because being such does not accomplish His righteousness in us.  With the Spirit, we have been appointed to better things, as 1st Thessalonians 5:9 tells us:

Because the Deity has not appointed us to wrath, but instead, to the possession of the life in our Master Yeshua the Messiah.

Let us therefore strive not to be “BENAY R’GESHI,” but instead, to be those who possess and promote life in Yeshua!
All study contents Copyright Jeremy Chance Springfield, except for graphics and images, which are Copyright their respective creators.